Home
/
News
/
The All-Too-Real Horror behind the Adrian Mellon scene in It: Chapter 2

Warning: Mild spoilers ahead for those who haven?t seen It: Chapter Two, or haven?t yet read the book

Shortly after the highly anticipated sequel to 2017?s film adaptation to one of Stephen King?s most notorious novels, I have had the pleasure of seeing the film in theatres twice now. And while I feel that this film didn?t quite stick the landing as well as Chapter One, I still regard it as a very solid effort, which is quite the enjoyable watch, and in my opinion, stays true enough to the source material.

Ever since this film hit theatres, there has obviously been quite a buzz surrounding the general film, it?s casting, and of course its most effective scenes. While there are many scenes in this film that work well for different reasons, none seemed to be quite as impactful as the films opener; enter Adrian Mellon.

In said opening scene, we find Mellon at a carnival in Derry (the town where the events of both films and the book take place), who is later joined by his partner Don Hagarty, a Derry local who Mellon met and stuck around with after arriving at the town from his hometown of Portland.

This couple certainly seem happy enough at the start, but it is made clear very early on that the town carries quite a violent homophobic attitude, with the introduction of three homophobic teens; Webby Garton, Steven Bishoff Dubay, and Chris Unwin.

The couple are first approached by Unwin, the youngest seeming of the three teens after the homosexual couple were caught kissing by the homophobic trio. Unwin spits on the ground before where Mellon and Hagarty stand before Webby intervenes to further intimidate the couple.

Mellon and Hagarty then leave the carnival and are once again alone for the time being. As they walk across a bridge, Hagarty talks to Mellon about leaving Derry, using their recent encounter as a prime example as to why it wouldn?t be a bad idea.

Upon realising the couple had actually been followed by the three homophobic teens, Mellon retaliates with cheeky remarks towards Webby in particular.

Much to many viewers dismay, the couple are physically assaulted quite brutally. What makes things worse is that we discover that Mellon is in fact asthmatic, as he hopelessly reaches for his inhaler. Mellon is then thrown over the bridges and sent floating down the river as the three bullies flee the scene.

Hagarty wastes no time in pursuing Mellon in the hope of rescuing him. In the film, we get our first glimpse of the film?s main antagonist Pennywise, the Dancing Clown, as he lifts Mellon?s flailing body from the rapid currents of the river, only to bite part of his ribcage clean off, almost as if the killer clown was ?going for the heart? as Hagarty watches in despair and horror.

It?s no rare opinion that this scene is indeed unnerving to watch, particularly because of the homophobic connotations. But as a result, many viewers were left quite shocked with the scene, some even disgusted.

I will continue to explain why?

The first and most obvious point to make is that this scene is one of many in the film that stays true to the book, and doing so is very important when painting a visual picture with the same level of creativity of innovation as the author of the films source material. Pleasing the author is quite an important aspect of making a book-to-film adaptation, and considering Stephen King wasn?t even that impressed with Stanley Kubrick?s adaptation of The Shining, he was obviously a tricky man to impress.

But considering this disturbing scene was part of the book, one might point the finger to blame Stephen King himself, accusing the author of concocting this homophobic fantasy. There?s even more to the Adrian Mellon scene that meets the eye.

I am also not exempt from being unaware of this until very recently, that Adrian Mellon, and the whole scene of violence was in-fact one of the few parts of King?s novel, which is based on a true story.

Mellon?s character was inspired by a real-life person named Charlie Howard, a New Hampshire born man, who identified as homosexual with his boyfriend, Roy Ogden, and became a victim of murder in the year of 1984, just a few years before the publishing of King?s novel.

The murder took place in Bangor, Maine. Coincidence or not, Maine is the American state where the fictional town of Derry is part of.

How the murder was described, seems almost identical to how it is depicted in the book (minus the killer clown of course). This real-life gay couple were too attacked by three homophobic teenagers; Shawn Mabry, James Francis Baines, and Daniel Ness. Howard and Ogden were harassed and then assaulted before Howard was, you guessed it, thrown over a bridge. Despite his pleas that he couldn?t swim, he plunged into the Kenduskeag Stream, beneath the state bridge, and eventually drowned.

So in short, not only is the opening scene of It: Chapter Two an adaptation of a part of the book, but an adaptation, of an adaptation, of a real life tragedy. Whether this was intentional on King?s behalf or not, Adrian Mellon?s death serves as a true eye opener and a grim reminder that violent homophobia is all too real, and is still noticeable today, if you open your eyes wide enough.

I too found this scene to be one of the most terrifying in the whole film, as homophobic hate crime is (or at least should be) far more believable, and furthermore far more scary than any alien killer clown. 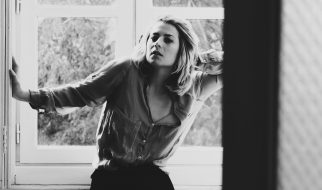