Home
/
News
/
The #TimesUp Movement: Has it Helped?

From Hollywood to Neighbourhood, Women Give Their Opinions What the #TimesUp Movement Stands For

The #TimesUp Movement was created by a group of celebrity women, who are fighting against sexual harassment in the workplace. Some of these women include Reese Witherspoon, Natalie Portman, and Shonda Rimes (Langone, 2018). The movement wants women to have equal pay for the same job that a male would have, pass laws that fine/penalize companies who tolerate workplace harassment, and launch a $14 million legal defense foundation to support all women who experience sexual harassment regardless of their job title (Buckley, 2018). It was requested for celebrity women to wear black on the 75th Golden Globes. They decided to wear black as they wanted to stand together as an army to show solidarity. The Golden Globes was also a large platform that was used to bring awareness to the movement. The #TimesUp Movement has helped women in the workplace to feel free to talk about their experience with sexual harassment, and social media has been a large factor to it.

In order to understand the #TimesUp Movement, and all that it stands for, we need to acknowledge why it was important to have. Women in Hollywood are fed up with the workplace harassment they face, and want to fight against the systemic sexual harassment in Hollywood and other blue collar jobs. According to the article ?Powerful Hollywood Women Unveil Anti-Harassment Action Plan? written by Cara Buckley, a letter was written by many women in the workforce, such as business women, female janitors, and A list celebrity women, to call out the harassment they face in the workforce (Buckley, 2018). This letter is important as these women are calling for their rights to be heard and for their co-workers/bosses to acknowledge and respect them. With this letter being signed by hundreds of women in different workplace industries, it united them and they became stronger knowing other women were supporting them.

Women in Hollywood felt silenced at times when their male bosses sexually harassed them. They felt as though they could not speak out about the harassment as they would just be accused of making up stories, and didn?t feel comfortable going into detail when asked to prove it. The article ?Behind the #MeToo and #TimesUp Social Media Campaigns? written by Moira Sullivan, states that the 75th Golden Globes, the #TimesUp Movement urged women to use it as a platform to talk about their experiences. These women, and other celebrities, wore all black dresses, held white roses, and brought guests with them that were activists who fought for the movement. (Sullivan, 2018). By bringing these guests and wearing uniform like clothes, it turned the Golden Globes into an activist platform where celebrities can talk about the movement and what it means to them.

?For years, we?ve sold these awards shows as women, with our gowns and colors and our beautiful faces and our glamour,? actress Eva Longoria said. ?This time the industry can?t expect us to go up and twirl around. That?s not what this moment is about.? (Buckley, 2018, paragraph 23).

This quote from Longoria emphasizes the idea that women at award shows are only seen as ?trophies?, and are not truly recognized for their work in Hollywood; which further aids in the idea of sexual harassment. It aids to this idea as it places the actress and the work she has done second to her looks. By celebrity women taking back the way they dress at award shows it puts the actress first, and her gender expression second. Women in Hollywood are not the only group of women who experience sexual harassment. Although due to the platform and privilege they have, it is up to them to make sure all women are being heard in the #TimesUp Movement.

Female Farmers and the #TimesUp Movement Even though this movement was created by women in Hollywood, a large number of women experiencing sexual harassment in the workplace is female farmers. This movement has helped them feel safer about sharing their experiences with sexual harassment. According to the article ?The Time?s Up Initiative: A Case Study In Criticism? written by Heather Rose Walters, there was a letter signed by seven hundred female farmers from the United States, that are apart of the Alianza Nacional de Campesinas organization (Walters, 2018). The letter was written on November 10th 2017, and inspired the women in Hollywood who participated in the #TimesUp Movement to ensure working class women were represented. This letter was written to show unanimity and solidarity between female farmers who have been sexually harassed in the workplace, and to help those less fortunate with fewer resources than those in Hollywood. The letter states:

Even though we work in very different environments, we share a common experience of being preyed upon by individuals who have the power to hire, fire, blacklist and otherwise threaten our economic, physical and emotional security. Like you, there are few positions available to us and reporting any kind of harm or injustice committed against us doesn?t seem like a viable option. Complaining about anything ? even sexual harassment ? seems unthinkable because too much is at risk, including the ability to feed our families and preserve our reputations. (Alianza Nacional de Campesinas, 2017, paragraph 4).

This quote is showcasing the sexual harassment they face, and how similar it is to women in Hollywood. The only difference is that the female farmers are dependent on their work, and can?t risk being fired as they will lose money to provide for themselves, and their family. They can?t simply quite or call out the harassment like those in Hollywood can, which is why it is important for celebrities in Hollywood to mention the sexual harassment female farmers face, so they can bring awareness to it. This letter was written specifically to women in Hollywood who do not recognise this movement as universal, and believe it is only for Hollywood women. Certain women in Hollywood also wrote a letter, criticising the movement and all that it stands for. While these women were attacking the movement, the female farmers were offering support towards other women. They choose to connect with other women with similar experiences, and used that connection to bring more awareness to the issues by creating the letter. The 75th Golden Globes plays an important role for the justice the female famers are fighting for. When celebrity women were asked about the movement they made sure to include the fact that it fights for all women regardless of their job title, which would include the female farmers.

The Good Side of Social Media

Social media has had a positive effect on the #TimesUp Movement. It has created a connection where people can share their experiences with sexual harassment globally. The article ?The Power of Hashtag Activism and How It Can Help The #TimesUp Movement? written by Kaithleen Apostol, talks about the hashtag #WhyWeWearBlack. This hashtag was on social media platforms during the 75th Golden Globes, and celebrities used it to talk about the #TimesUp Movement (Apostol, 2018). Celebrities would post pictures of their outfits and the guest activists that joined them with the hashtag underneath the post. By doing this, it caused the movement to be more global as you can click on the hashtag anywhere and learn more information about it. 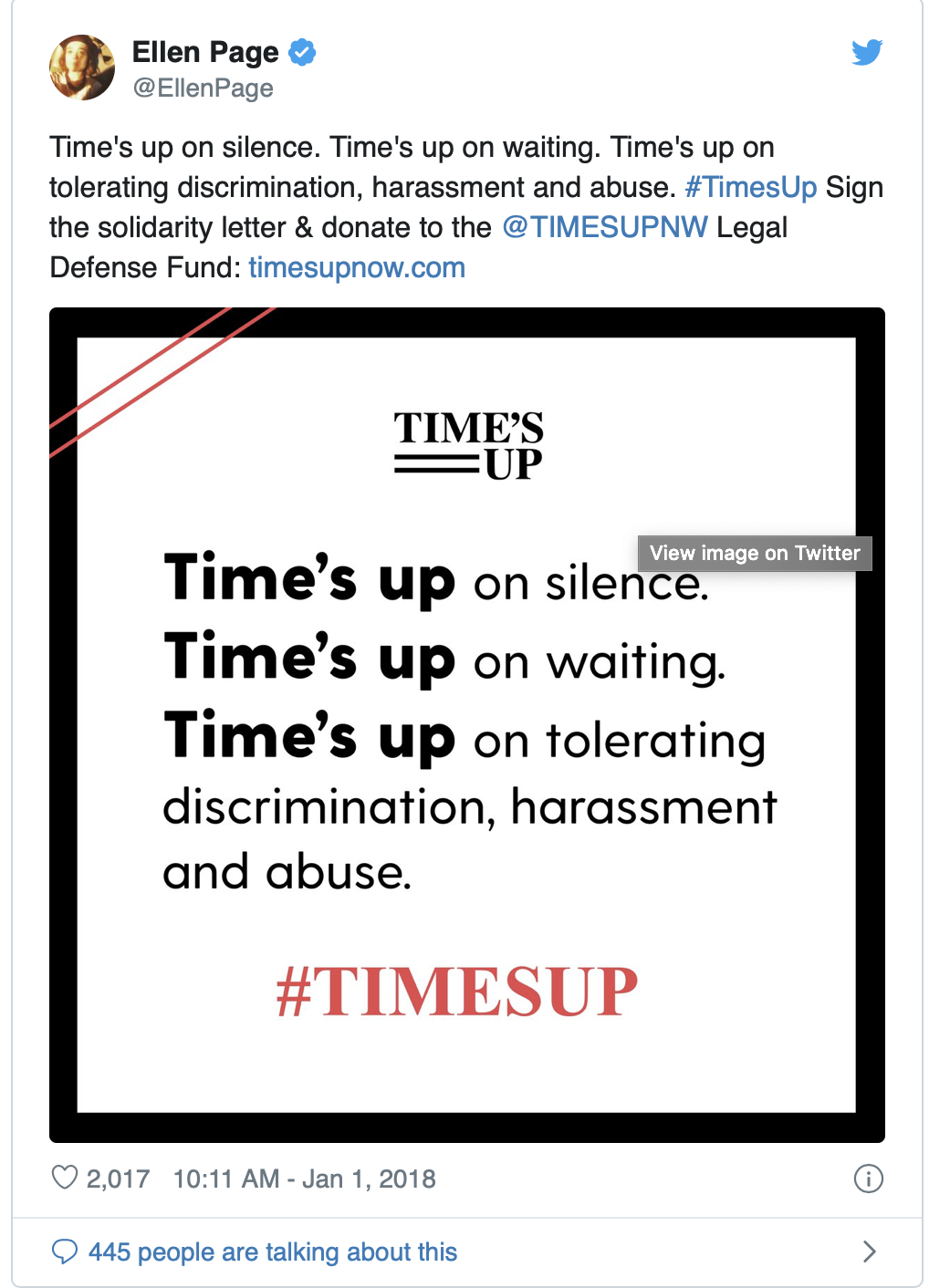 (Ellen Page Tweet, retrived from The Power of Hashtag Activism and How It Can Help The #TimesUp Movement. Apostol 2018)

Another hashtag that went viral from the movement was #TimesUp, the title of the movement. This hashtag was used for people to share their experience with seuxal harassment, and at the end of the post, the hashtag was stated to show that the harassment will no longer be tolerated. Ellen Page tweeted about the movement and wrote ?Time?s up on silence. Time?s up on waiting. Time?s up on tolerating discrimination, harassment and abuse.? (Page, E. @EllenPage, 2018 January 1. Tweet. Retrieved from ?The Power of Hashtag Activism and How It Can Help The #TimesUp Movement?) This tweet highlights the movements main goals in a few sentences. Since the tweet was on social media, many people were able to see it and then they were able to gain more knowledge about the movement by clicking the hashtag. If it wasn?t for social media, the sexual harassment issue with female farmers would be left in the dark, and would remain unknown to many people.

Aposto, K. (2018, March 14). The Power of Hashtag Activism and How It Can Help The #TimesUp Movement. Retrieved from .https://medium.com/women-in-the-industry/the-power-of-hashtag-activism-and-how-it-can-help-the-times-up-movement-e4240a64ebcf.

Entertainment Tonight. (2018, January 9). 8 Women Who Led the ?TimesUp? Charge at the Golden Globes. Retrieved from https://youtu.be/iRw_8_nzLyE.

Langone, A. (2018, March 22). What is the Time?s Up Movement and the #MeToo Movement? Retrieved from https://time.com/5189945/whats-the-difference-between-the-metoo-and-times-up-movements/.

Walters, H. R. (2018, January 15). The Time?s Up Initiative: A Case Study In Criticism. Retrieved from https://hermag.co/times-initiative-case-study-criticism/.