Nevaeh Buchanan was last seen alive on May 24, 2009, in the town of Monroe, Michigan.

It had been a warm summer evening in 2009, and Nevaeh Buchanan, 5, had been playing outside of her home in Monroe, Michigan. Nevaeh?s disappearance and murder would turn a little town upside down with years of tears, heartache, and unanswered questions to follow. Monroe is a small town of only 20,000 located in Monroe County on the western shores of Lake Erie about 33 miles southwest of Detroit. Though a small town, Monroe is not considered one of the safest communities in America, with a crime rate that is higher than 85% of the state?s cities and towns of all sizes.

No one in the town could have anticipated the horror that was to follow.

The last time anyone saw little Nevaeh Buchanan alive was on Sunday, May 24, 2009. She was last seen at approximately 6:30 p.m. in the Charlotte Arms apartment complex where she lived with her mother Jennifer Buchanan and grandmother Sherry Buchanan.

It was Memorial Day weekend and school was out that Monday so Nevaeh?s mother Jennifer let Nevaeh play upstairs at a friend?s apartment. Nevaeh Buchanan was last seen playing outside of her apartment on May 24, 2009, in Monroe Michigan, and later found murdered.

At 8 p.m., Jennifer went upstairs to get Navaeh and she wasn?t there. Another friend ?tattled? and told the worried mother that Navaeh was outside playing in the U-turn driveway at the complex. When Jennifer got there, all she found was Navaeh?s scooter sitting abandoned at the edge of the property. Nevaeh was gone.

Jennifer frantically searched for her daughter while screaming her name and someone called the police. ?She wasn?t supposed to be outside,? said Jennifer. ?She was supposed to be upstairs playing with her friend at their place.?

The police immediately launched a search for Nevaeh that began with officers and volunteers and quickly grew. Authorities combed the apartment property and all 180 units of the complex, interviewing each of the residents. The FBI soon joined the search bringing in helicopters and dogs to help search the surrounding woods. On May 26, 2009, an AMBER Alert was issued after police determined Nevaeh was abducted and in imminent danger. The AMBER Alerts were broadcast through radio, TV, road signs, cell-phones, and other data-enabled devices. Fliers were made and family, friends, and volunteers posted them throughout Monroe. Authorities entered Neveah?s information into the FBI National Crime Information Center and registered her with the National Center for Missing & Exploited Children quickly distributing the missing child?s information throughout the country.

According to the Toledo Blade, the Monroe County Sheriff?s Department held a press conference. Lt. Todd Opperman told the press that investigators were interviewing hundreds of people. ?We are looking for anything out of the ordinary. This is an ongoing investigation and we will be working around the clock on this until it is complete.? Following the press conference, Nevaeh?s grandmother Sherry made a tearful appeal for the safe return of the little girl.

Holding Nevaeh?s favorite stuffed animals, Sherry was clinging to hope that her granddaughter would be brought home alive. ?I know she?s missing all of her animals,? Sherry said.

In 2009, two men, Roy Lee Smith, 48, and George Kennedy, 39, were arrested as possible suspects. Both men are registered sex offenders and arrested for probation violations, but were only ?persons of interest? in the abduction of Nevaeh. George Kennedy (left) and Roy Lee Smith (right), were both convicted sex offenders that were arrested and named ?persons of interest? in the abduction of Nevaeh Buchanan.

Both men were friends of Nevaeh?s mother Jennifer. She said she knew of their previous charges but never thought they would harm her daughter.

When speaking of George Kennedy, ?I was just befriending him. I confronted him about it. To my knowledge he was honest to me about it,? said Jennifer.

She acknowledged she also knew of George Kennedy?s background. ?As for Roy, I only knew him a couple of months. Because he knew George and they had some of the same kind of classes together, I figured Roy had the same offense against him.?

Kennedy had been previously charged with home invasion and criminal sexual conduct in the 4th degree.

As part of his supervision conditions, Kennedy had to be supervised around minors and could not be in possession of child clothing, toys, or games.

Children living in the same apartment complex as George Kennedy called him ?Daddy George.? The Toledo Blade reported that friends of Jennifer described Kennedy as her boyfriend.

To this day, no charges have been brought against Kennedy or Smith.

On June 4, 2009, Guy Bickley, was fishing with his 15-year-old son and his father who had been visiting for several weeks from Tennessee. The fishermen were walking along the River Raisin in rural Monroe County and came across a shallow grave covered in cement. The River Raisin is located in rural Monroe County, Michigan, where they located the body of Nevaeh Buchanan in 2009.

?We went down on the banks and immediately I saw some concrete on the ground off to one side where we were going to set up, and there were some rocks adjoining where we were going to fish,? said Bickley. ?I thought someone had filled a hole where some erosion was starting. I simply did not know it was anything more than that at the time.?

Bickley sat there, placing his feet on the concrete as a footrest and began to smell an odor. At first, they thought it was a dead fish. He took a walk along the river and didn?t smell anything and returned to the spot he had been fishing. The odor strong, the concrete began to crack as he stepped down on it and flies began to swarm the area.

?I proceeded to scrape the concrete off in chunks and that?s when a small part of skin was visible to me and my father and we immediately packed up our gear and moved to the top of the hill and called 911.? Crime scene technicians search the River Raisin for evidence after the body of Nevaeh Buchanan was found by fisherman Guy Brickley.

When authorities responded to the scene, they found Nevaeh nude, her clothing buried with her. The grave also included a Busch beer can. Authorities traced the can to a Hi-Lite Supermarket in Monroe.

Sheriff Crutchfield told the Toledo Blade that Nevaeh may have been held down or buried alive, causing her to suffocate. He added, the autopsy showed there was no trauma such as broken bones or bruises to the body.

The exact time or day of death could not be determined.

Shortly after the announcement that Nevaeh?s body was found, Nevaeh?s uncle Michael Buchanan said his sister Jennifer had been notified and ?broke down, and broke down hard.?

Nevaeh?s grandmother Sherry spoke ABC News and said, ?Whoever the killer is, I hope they give him everything that?s coming to him.?

Shocked and grieving about the news her granddaughter had been found, Sherry told the officer, ?You?re not going to be able to protect him,? she said. ?One way or another I am going to get him.? Nevaeh?s father Shane Hinojosa aimed his anger toward Nevaeh?s mother after the discovery of their daughter?s body.

Nevaeh?s birth father aimed his anger and grief toward Jennifer. ?This is what happens when they give children to bad people I guess,? said Shane Hinojosa.

Prior to Nevaeh?s abduction, Jennifer had been in jail and charged with First Degree Home Invasion. She was on probation for the crime when Nevaeh vanished.

Coping in the Aftermath

Neveah?s legal guardian and grandmother Sherry Buchanan has since passed away. 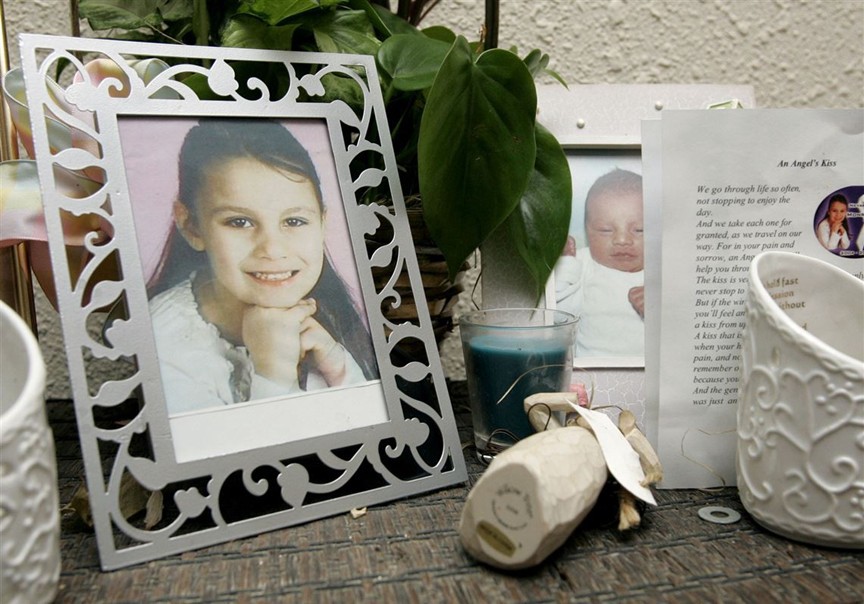 Nevaeh loved trucks, crayons, motorcycles, and macaroni and cheese. Three days before her disappearance she had graduated from the Discovery Preschool Program and ran across the stage for her certificate. She loved hanging out with her new best friend Austin and thought she was ?hot stuff? while driving around in her little Power Wheels Escalade or riding her scooter. In her obituary, it said that even at the age of five, Nevaeh enjoyed the sound and look of a motorcycle.

The little brown brown-eyed Angel impacted her community who had rallied together to find her.

Family and friends remain frustrated and angry there has been no arrest in the case but one person has been especially impacted.

?I can?t drive down Macomb Street without thinking about her,? Brickley emotionally told the Sentinal Standard. ?I hope that his conscience eats away at him and eventually he?ll say something to the wrong person.? Guy Brickley and his son now tend to the place where Nevaeh?s body was found.

Brickley says he?s still invested in Nevaeh?s case and doesn?t feel much different than he did the day he found her. Traumatized.

When asked if he ever visits the riverbank where there is a makeshift grave set up with a cross, he says, ?I go there regularly and cut the grass; I plant flowers. We?ve got roses out there.? Brickley even dug up some Tiger Lilies from around his house and planted them there too.

?I collect toys and bring them now and then,? said Brickley.

Fishermen no longer use the place where Nevaeh?s body was found as a fishing hole. The place is now thought of as holy ground.

Brickley could never have fathomed his life would be so directly impacted by a little girl who had the world before her and brutally snuffed out.

Trying to cope with his own trauma, Brickley recalls a note he received from a total stranger, Debby Kansier, who he says in just a few short sentences changed his outlook on the situation of ?why? he was the one to find Nevaeh.

The note said, ?Please don?t think for a minute this was a coincidence,? Debby wrote. ?God uses ordinary people to do the extraordinary and He will comfort and bless you during this difficult time; you are a very special man.?

?She made me feel like I was a messenger from God,? Brickley tearfully beamed. ?Someone sent me there to stop the madness, the anguish, the turmoil in everyone that was searching for her; to bring it to an end.?

Though Nevaeh?s body was found, over ten years later, we still wait for an answer as to who killed her and thank those like Guy Brickley for following their path in life . . . one we would never want to walk.

The FBI is offering a $20,000 reward for any information leading to the arrest of a suspect. If you have any information about the murder of Nevaeh Buchanan, please call the Monroe County Sheriff?s Office at 734?240?7700.