Home
/
News
/
It was the hatchet that was used to attack rock & roll.

It was the most notorious rock & roll romance of all time, the Big Bang of pop music scandal. Before Kurt and Courtney, Sid and Nancy, or John and Yoko, there was Jerry Lee Lewis and his thirteen-year-old bride, Myra Gale Brown.

In 1958, when Elvis Presley was drafted into the military, Lewis was perfectly poised to become rock?s biggest star. Coming off of ?Whole Lotta Shakin? Goin? On? and ?Great Balls of Fire,? he embarked on a tour of England that was supposed to establish his fame worldwide. But when the Lewis party landed in London, the press wanted to know about the teenage girl at his side.

?The only problem was that nobody told me anything,? says Myra?now Myra Williams, a real estate broker in Atlanta. ?So when a reporter asked me, Who are you?, I was the one who let the big ol? cat out of the bag. It was a perfect storm?it couldn?t have happened at a worse time, at a worse place. Everything just came together and a major explosion happened.?

The British tabloids went ballistic, and after a few dates, the tour was cancelled. Jerry Lee held a defiant press conference at the London airport, boasting about his houses and cars and accusing the British of being ?just plain jealous,? and the Lewises returned home to Memphis. By the time they made it home, it had been discovered that Myra was the daughter of Jerry Lee?s cousin and bass player, J.W. Brown, and that the 22-year-old singer was still technically married to his previous wife, Jane Mitcham. Myra sits on the lap of husband Jerry Lee Lewis at the press conference that sparked an explosion of negative publicity in London, May 23, 1958 | Five days later, Jerry Lee and Myra arrive in New York, after his tour of England was cancelled

?I was in England when they ran him out of the country,? Kris Kristofferson has said, ?and it really seemed unfair to me, because he had no idea he was doing anything wrong. He went immediately from being a guy who made $10,000 a night to a guy who didn?t make $100 a night.?

A few years ago, Rolling Stone sent me to the Lewis Ranch in Nesbit, Mississippi. The plan was to shoot a portrait of Jerry Lee and Myra together, and I would write up the experience and their interaction. In blistering heat, with nine dogs scurrying underfoot, I found that Myra was a bright, funny woman, with a very clear perspective on her notorious past, and she gave new insight into this pivotal moment in rock & roll history.

Most people might not want to be reminded of a time when, as she put it, ?his career took a nosedive right into the concrete,? but displayed in the den, alongside the gold records, family memorabilia, keyboards, and bibles were several photos of The Killer with his adolescent wife. Though Lewis has been married five other times, it seems that Myra remained close to his heart.

After thirteen years of marriage, they were divorced in 1970, when Myra charged that she ?has been subject to every type of physical and mental abuse imaginable?; Jerry Lee later said that ?it was all my fault?she caught me cheating.? When we met, she described their relationship as a ?successful divorce,? though more recently it seems they?ve been clashing over his current, seventh wife.

The two of them were playful and affectionate during the shoot?joking and giggling, poking and swatting each other, Jerry Lee even sneaking a kiss at one point?but when the photos came back, the editors fell in love with a shot of him sitting alone at his childhood piano, and the piece was recast as a straight profile. Myra?s voice was relegated to a quote or two. This week, Jerry Lee will release both Rock & Roll Time, a studio album of duets, and a memoir, Jerry Lee Lewis: His Own Story, written with Rick Bragg. And still, the world remains fascinated by the marriage?when the Wall Street Journal asked him about it recently, he said, ?I probably would have rearranged my life a little bit different, but I never did hide anything from people? The newspapers in England came down heavy but they didn?t faze me, really. I just went on with my life as usual.?

Since Myra Lewis Williams, now 70, was never able to go on with, or even to start, her life ?as usual,? it seemed a good time to finally let her tell her own story, in her own words. 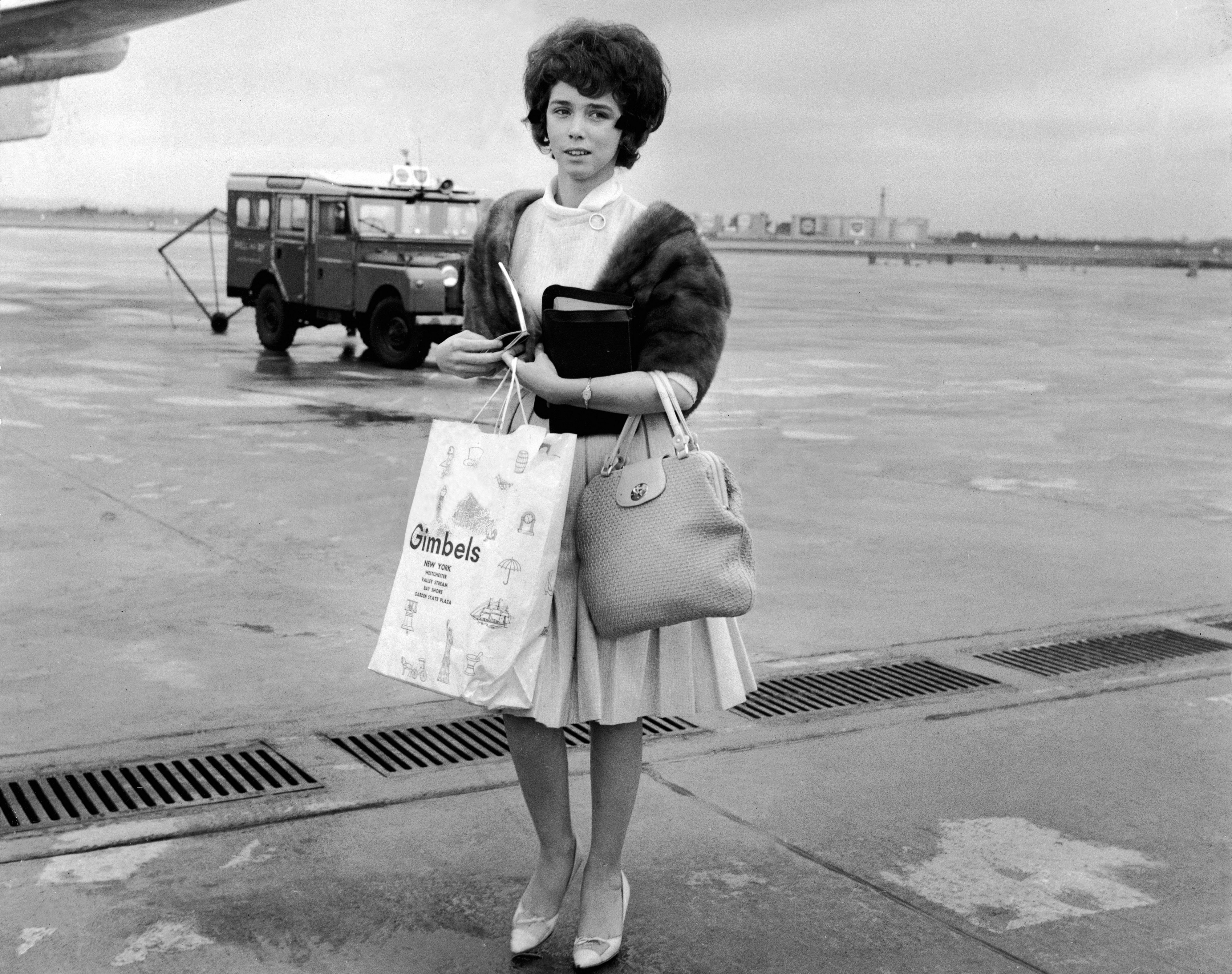 Myra with a purse, Bible, and shopping bag, on the tarmac in London, May 9, 1962. This was the couple?s first return to the U.K. after outrage over their marriage forced them to cut short a tour four years earlier.

Myra Lewis Williams: It?s not a story that ever went away. I?m still the 13-year-old child bride. Sometimes I say something about Jerry and people say, ?Isn?t he the one married the little girl?? and I say, ?Wait a second, you?re talking to the little girl now?be careful what you say.?

There were so many stories told that were not necessarily the truth, or else it was the truth wearing a mask. When all of this hit in London in 1958, it just took the world by storm. It bumped De Gaulle off the front page of the newspaper. They said Jerry played to a half-empty house, and they booed and that kind of stuff, and that was not true. The fans there were so excited to see Jerry that the biggest problem was his safety?Scotland Yard said, ?We don?t know how to protect you.? The people were climbing on the buildings, looking through windows trying to find us and we couldn?t go out.

At that time, Elvis had gone into the Army, and Jerry was poised to be the king. All of Jerry?s managers told him, ?Do not take Myra to England,? because the British press was known to rip Americans apart?that?s where all the tabloid journalism started. He said, ?If Myra doesn?t go, I?m not going.? Everyone underestimated me being aware and possibly knowing what to do. I could so easily have said, ?I?m J.W. Brown?s daughter. That?s my little brother, that?s my mother.? Because that was the truth! If anybody had told me anything, I could have prevented this thing. But they didn?t, and I didn?t, and the rest is history, I guess.

In my little mind, I couldn?t believe that they could not see that I was a grown woman. I was only 13, but people said I was more mature than Jerry. I was serious-minded, I was like, ?We gotta take care of this and do this,? and he was like, ?Where?s the piano?? That?s what he is, that?s what he?s about. And I really, truly wasn?t a typical teenager. My generation was taught to hide under our desk when the bomb came, so you always had in the back of your mind that any minute, any day, life could come to an end. What I wanted was a baby in my arms, a home, a husband, a kitchen to cook in, a yard to raise roses. My little brother was born because I begged my parents for a baby at ten years old. They called me his deputy mom; I just took him over. That was what I was like, and Jerry was busy having fun, he was the true entertainer.

It wasn?t anybody?s business?OK, it was somebody?s business, but it wasn?t everybody?s business. It was my family?s business, it was mine and Jerry?s business. And, OK, if you say to me now, ?There?s a 13-year-old girl over here who wants to get married,? I would say ?God, please do not do that, little girl. Go to college, get an education, then figure it out.? But it was a different world, things have changed so drastically. Options, mindsets?this world has gone so fast the last fifty years that you can?t keep up with it. When we went back home, the whole country was ?Shame on you, bad boy.? The other thing we had back then was a hypocritical society. It was ?Do as I say, not as I do?and if you get caught, we don?t even know you.? Also, a lot of people took good notes when it happened. Elvis didn?t marry a little 16-year-old girl, did he? Priscilla lived with his grandmother for, what, seven or eight years?

It was something that marked Jerry for life. We kept thinking every year, every six months, that it was going to go away, they?re going to stop talking about it, and it just didn?t happen. But it brought me and Jerry very close, and we had ten incredible, wonderful years together after that. We were like a little camp that had been attacked by the enemy, and we held strong to each other and said, regardless of what they do, we?re going to keep fighting. Jerry?s fame and money went down to almost nothing, it was very turbulent for ten years, but it was the happiest years of our marriage.

I never lost the first name ?13-year-old-child-bride-Myra??I think that?s on my birth certificate now! I don?t think I ever resented it for me, though, I always resented it for what they did to Jerry. It wasn?t harming me, it was harming somebody I loved, that was the pain of it. I was seeing someone punished because of my age, my existence, and I always wanted to just stand up and defend him.

We took a lot of hits for the music itself. Every day, you wondered what was going to happen next. Everything came together at one time, and here?s Elvis and here?s rock & roll and here?s Dick Clark and Ed Sullivan?a new generation born, a new music born. The preachers preached against it, it was the devils? music. To the mainstream educators, it was evil and wicked. It was different, it was the new kid on the block and the new kid arrived in a storm. And they just weren?t ready for that. Change isn?t something that everyone always likes??Play some Frank Sinatra, what?s wrong with Sing Along with Mitch?? It was a time and a place that won?t come around again.

They were looking for a place to stick the knife into rock & roll. And Jerry gave it to them?well, I did, I opened my mouth. That?s exactly what it was.

The rise and fall of Joe Meek and Phil Spector

Dear Rock and Roll Hall of Fame: Adapt or Die ? Love, A Millennial

Why I still care about those luddites at the Rock Hall, and how they must evolve