When I moved in there were a couple of dark spots on the carpeting between my kitchen and my bathroom. Since that is probably the heaviest traveled chunk of carpeting in my apartment, I have accidentally added to those original dark stains. But I could never get them out with the carpet cleaner I bought. So I didn?t have much hope for the post on Getcleaningdone saying that baking soda, dishwashing liquid, and vinegar would get the stains out. 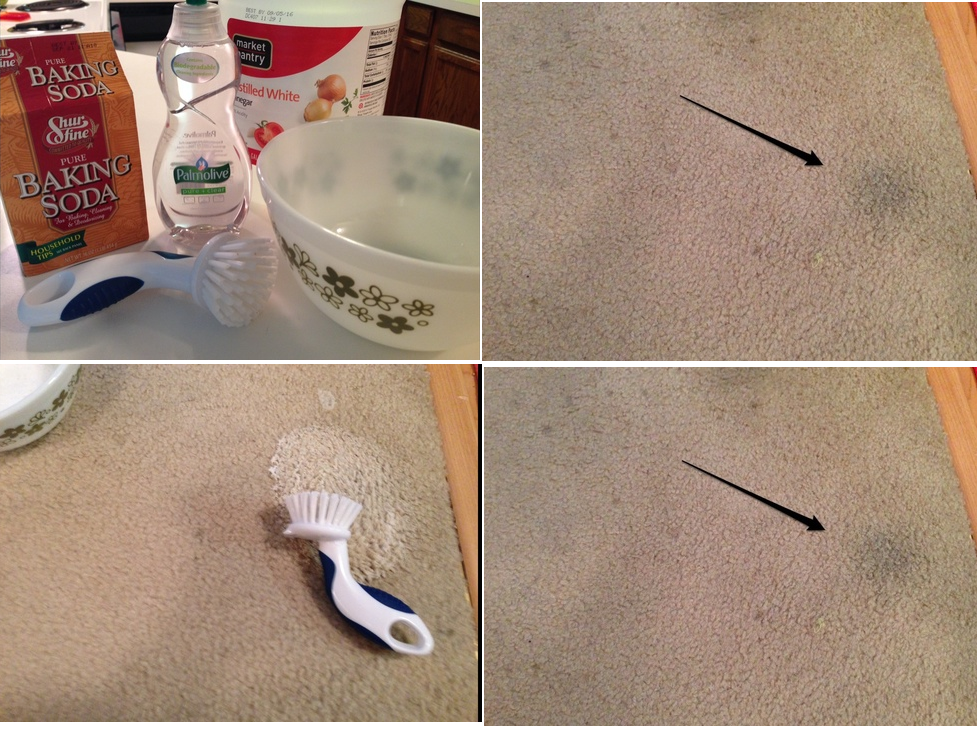 How to remove old carpet stains with vinegar and baking soda

If I could rip out all of the carpeting in my apartment and replace it with wood floors I totally would. Wood floors are a ton easier to clean, and I think they look better. But since I?m a renter I have to deal with the one downfall in my apartment, beige carpeting.

Stains on carpets are unsightly and typically difficult to remove. Make a paste of baking soda and distilled white vinegar, rub it into the stain, and leave it overnight. Vacuum it completely the following day.

The post says to sprinkle baking soda on the stain and let it absorb, then vacuum it up, but since my stains were so old I kept the baking soda on the spot to add to the power of the mixture. Then combine a tablespoon of clear dishwashing liquid, a tablespoon of white vinegar and two cups of warm water. I doubled the amounts because I had about a dozen spots the size of an apple I planned on attacking. The post says to use a washcloth to sponge the stain with the solution and blot it until all of the liquid is absorbed.

With the addition of the sprinkle of baking soda, the spots on my carpet fizzed a little and then the soapy mixture started to suds. I used more water to scrub the soapy mixture out of the carpet and had to dab the spots for about 10 minutes or so to get the soapiness to go away. The whole process definitely took longer than the post suggested, but once the carpet was dry the dark spots were gone!

With some small adjustments, this Getcleaningdone post definitely works. I suggest using two tablespoons of clear dishwashing liquid, two tablespoons of white vinegar and 4 cups of warm water, especially if you have a large area to clean. Then, unless the spot is brand new, I would keep the baking soda on the spot (remember, it?s just a sprinkle) as you?re dabbing the stain with the vinegar mixture. That way the baking soda and the vinegar will react and break up the stain better. And if the mixture works as good for you as it did for me you will see exactly how dirty the rest of your carpeting actually is!