A few years ago, a ?Project X?-type party attended by more than 2,000 people overnight at a farm in Mecosta County, Michigan got out of control where six people had to be hospitalized and one woman reported to have been sexually assaulted.

Deputies from the Mecosta County Sheriff?s Office were dispatched to a traffic complaint due to cars parked in the roadway which lead to the discovery of a large rave party at a Hinton Township residence

The crowd of more than 2,000 consisted mostly of people under the age of 21. Medical units had to be dispatched to the scene treating multiple alcohol patients and drug related injuries and overdoses. Individuals were sent to Kelsey Hospital in Lakeview, Mount Pleasant Hospital, and Spectrum Health in Big Rapids.

?It was insane,? said Charrelle Dunston who was hired to dance at the party. ?I?ve never seen so many people in like a gathering like that. It was amazing though.?

Dunston said the party was no accident. It was organized through social media as a ?Project X? type gathering, similar to a 2012 movie of the same name about teens who throw a massive house party using social media. Invitations sent out over social media billed the party as ?Project P ? Danny?s B-Day.? ?It was all online on Facebook, they weren?t giving the address out until a couple hours before the party,? said Dunston. ?That way the cops couldn?t plan for it and try to stop it.?

Jim Purdy, who lives about two miles away from the site noticed a large number of cars coming into the area Saturday afternoon. He could hear the music and party loud and clear. ?It was just a lot of boom boxes, a lot of music, people going back and forth. I figured there was a party somewhere, but I didn?t have any idea it?d be like this.?

Project X is an out-of-control comedy that follows a group of buds who set out to throw the most epic 17th birthday party ever.

The film documents three seemingly anonymous high school seniors ? Thomas, Costa and J.B. ? as they attempt to finally make a name for themselves.

Their idea is innocent enough: let?s throw a party that no one will forget, and have a camera there, to document history in the making?but nothing could prepare them for this party.

Word spreads quickly as dreams are ruined, records are blemished and legends are born.

A group of teenagers have been accused of wrecking a $500,000 home in a copycat of the film ?Project X.?

In Texas, in 2012, teens threw a similar party at an empty home before going on a wrecking spree with the building owners saying it looked like it had been hit by a tornado. Nearly every window in the Houston home had been smashed, and walls kicked in. 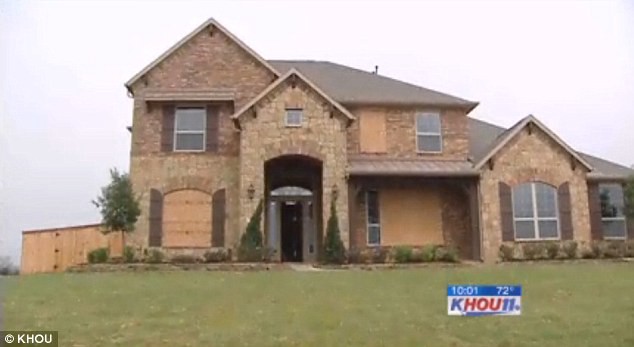 In the movie, matters spiral out of control as words about the party spreads and the house they host the party in is destroyed by fire, along with parts of the neighbourhood. ?When you look at the movie, and you look at what happened here, the parallels are the uncanny,? said a neighbor.

?It was a copycat. They did everything that I saw in the movie. There were liquor bottles, beer bottles. I mean it was a big party,? he said.

Among the bottles, sheet-rock inescapably lay ripped across the floor mixed with the glass from the two-story home?s many windows.

Doors, torn from their hinges, contributed to the piles while above them, holes punctured the walls.

Police arrested 13 teens at the scene of the 4,000sq ft wrecked home. Of the 13 arrested, two of those were juveniles and were released into the care of their parents. The other 11 were charged with criminal trespass and taken to jail.

With the home?s builder estimating the repair costs to be between $80,000 to $100,000, the teens are expected to face serious criminal charges.

In Los Angeles in 2012, hundreds of teenage revelers, inspired by the movie, descended on a home in an exclusive part of Los Angeles after being tipped off it was empty on social networking sites. Terrifying footage from a neighbour?s CCTV camera shows the 500-strong mob rampaging through a street in Holmby Hills ?like a swarm of bees?. Police wearing riot gear were called and neighbours reported seeing youths jumping from the second floor of the property and running though other the backyards of other backyards to escape.

The Los Angeles Police Department (LAPD) said many of the party-goers had come from another event in Beverley Hills that had been stopped. They learnt of the new venue via social networking sites like Twitter and Facebook and smartphones.

Local resident Mindy Newman was peacefully reading when she noticed the arrival of teens at about 10:30pm ?like a swarm of bees?. When police arrived, the merrymakers ?scattered like mice?.

A local police officer noted that American teens such as those involved in the two LA parties were inspired by the behaviour glorified in film Project X.

He said: ?They are out of control, destructive and violent and now life is imitating art in Los Angeles.?

Officer Karen Rayner, a spokeswoman for LAPD, said of the Bel Air shindig: ?It was fairly large and destructive.

?They [the teens] committed vandalism, they stole things. They basically trashed the location.?

Neighbour Shana Manlopic said the sight of the teen mob was ?kind of scary?.

There were several arrests following both parties, with charges including vandalism, burglary and drug possession.