Storytelling is rarely a static process; it changes with your mentality, your audience, and the culture surrounding your work in the first place. The ending that you plan at the beginning of your magnum opus might not ring true as you continue to work on it. The best artists are able to follow that intuitive sense, giving themselves permission to improvise and change things, even if they run against audience expectations or tried-and-true tropes. Recently, George Morikawa?s long-running boxing comic, Hajime No Ippo completely shocked fans with a plot development, one that seemingly came out of nowhere. Instead, it?s one of the most brilliant use of long-form storytelling that I?ve ever seen, utilizing its 25?year-long publication history and decades of genre tropes to craft an emotional twist that was completely earned.

I?m going to go ahead and spoil a weekly comic that?s been running for 25 years after the jump, so, before I do?

First, yes, Hajime No Ippo isn?t translated legally into English and that?s a damn shame. It?s one of the most well-drawn and emotional comics that I?ve ever read, and the longevity of the series absolutely contributes to the emotional investment you feel for the characters. I?d encourage anyone reading this to ask Kodansha Comics to publish the series legally in English.

Second, Hajime No Ippo is absolutely worth a read. It?s one of the few comics that I?ve read that acknowledges a wider world beyond the subject matter itself. The series follows Makunouchi Ippo as he finds confidence and friendship in boxing, rising through the ranks of the world?s best boxers. It?s a fairly standard hook for a sports comic, but there?s much more to it than that.

The boxers in Hajime No Ippo almost painfully understand that their careers are short and that the levels that they operate at are unlikely to take them to the heights of fame and fortune that might occur for those more gifted. There are no secondary characters in Hajime No Ippo, just those with less talent who work as hard as everyone else and come up wanting. When a character announces their retirement, you can?t help but grimace knowing how hard they worked. When a character finally wins, you thrill at their perseverance against what seems like fate.

The artistic prowess on display, too, is amazing. The way the boxers move across the page shows a mastery of the comics form and a genuinely impressive understanding of anatomy. In short, punches in Hajime No Ippo look more impressive than just about any punch I?ve seen on the printed page in my life. Predominantly though, the thrill of the comic is in not knowing what choices author George Morikawa will make in writing these fights. When a character enters a ring swearing to retire if he loses while his opponent enters with the understanding that a loss would ruin his ability to compete on the world?s stage, you want so desperately for them both to win. The nail-biting tension is as real for the comic as it is for genuine sporting matches, and I would hate to ruin that for anyone who hasn?t experienced it for themselves, so make sure you know that you?ll be trading that experience by reading below. I?ll still do my best not to over-spoil.

All sports have an inherent risk of injury, but certain sports are objectively more dangerous than others. A busted knee can bring down someone?s football or tennis aspirations, but boxing, American football? sports like these are leagues more dangerous. As a creator, you can choose not to engage with that risk of crippling injury; Eyeshield 21 by Riichiro Inagaki and Yusuke Murata follows a group of American Football players in high school, but the tone is more fantastical than serious. The risk of constant concussions and bone-breaking tackles isn?t really addressed in the comic except as a short-term fear. But for as dangerous as football is (and it absolutely is), there is a fairly large list of boxers who died either in the ring or as a direct result of their injuries. (read panels right to left) Morikawa doesn?t shy away from that inherent danger, either. The main character, Ippo, is delighted by the sport of boxing, but there?s plenty of other characters in the comic that find pleasure in inflicting pain on their opponents. Ippo might view boxing as the presentation of hard work and a test of skill, but the comic itself never avoids the uncomfortable truth that boxing is dangerous. Characters find themselves needing multiple days to recover, injuries and brain damage put an early end to promising careers, and one character tragically crashes his motorcycle directly into an oncoming semi-truck after a particularly grueling match.

It?s that aggressively honest portrayal of the sport that makes the comic so addictively entertaining. Unlike other shonen comics, Hajime No Ippo largely follows professional boxers; for the characters in the comic, this is their career and their dream. This isn?t an after-school club that they?ll experiment with for a couple years before moving on to a real career or college; it?s their job and their passion, even while they know that the lifetime for most boxers isn?t long. Foreign boxers unable to put on a good show are sent back to their home countries, regardless of the friendships they?ve made or the hard work they?ve put in. Losing in Hajime No Ippo can mean the end of your career, and even winners find themselves having to retire. 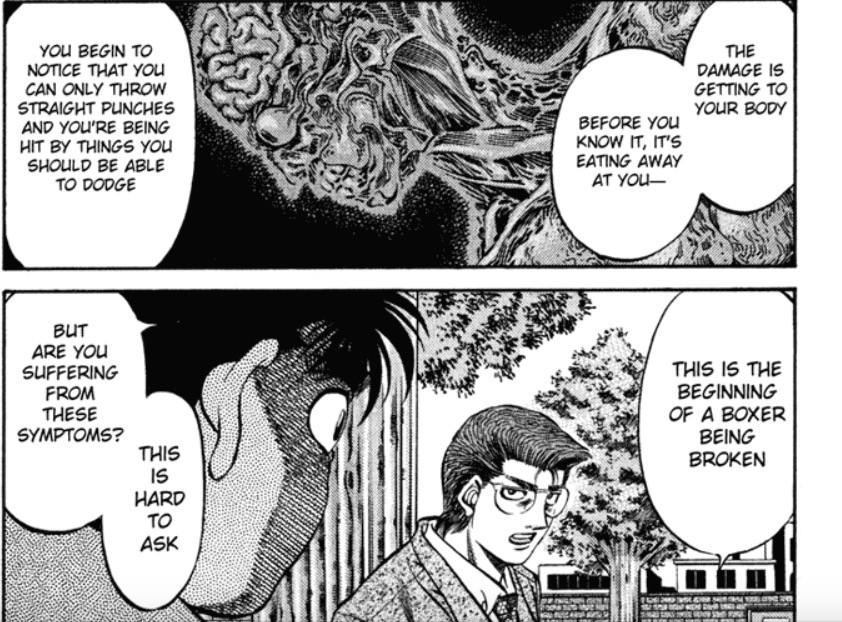 After 1200 chapters, 25 years of weekly publication, and over 25 fights, Ippo loses his comeback match, immediately after promising to quit boxing if he loses just one more fight. The actual match is absolutely crushing, as Ippo realizes mid-fight that he?s punch drunk and that he won?t be able to overcome it through willpower. Worse, his goals for the match change from winning to just showing the fruits of his hard work to the coach. It?s incredibly tragic to watch a character that readers had been following for years crumble in the face of a disease that he can?t overcome.

It doesn?t come out of nowhere, either. For years, the biggest fear for many of the boxers in Hajime No Ippo was that they would be struck by the disease. Nekota, one of the coach?s old friends, experiences the symptoms first-hand in a flashback, while Ippo and Miyata worry that Takamura is showing symptoms for hundreds of chapters. In the world of Hajime No Ippo, like in actual boxing, constantly getting hit in the head is incredibly dangerous. While fans have been predictably upset that their favorite boxing protagonist has to retire early, there?s been literal years of foreshadowing that Ippo would injure himself in boxing.

Although Ippo becomes the Japanese champ and has some impressive KO victories, his fighting style is incredibly brutal and usually leaves his face more bloodied than his opponents. It?s almost a running joke that Ippo leaves the ring as a victor more beaten and injured than the losers. Come from behind wins are a dime in dozen in sports comics, but Ippo?s fights are particularly brutal. His rivals like Sendo and Vorg run into their fair share of difficult fights, but almost always find themselves unquestionably the victor. Ippo?s fights and comeback KOs are exciting to read, but that punishment builds up over time. But there?s a narrative angle to this story element beyond the realistic result of years of punishment taking their toll on the body. While readers have been conditioned to believe that the characters that they?re following will accomplish their dreams and become the very best (like no one ever was), ?becoming the best? was never Ippo?s goal. He enjoyed boxing, but his main goal in almost every match was to make his coach proud and put his training to the test. The few matches that he goes in specifically to win or to destroy an opponent are rare, and his good-hearted nature is frequently mocked by more naturally violent boxers.

Despite the protestations of Hajime No Ippo fans, this was the only satisfying way for Ippo?s story to end. He never really wanted to make it to the world?s stage, he just wanted to discover what it meant to be strong and eventually to take over the family business. There?s a deeper level to Ippo?s loss, as well. Morikawa was in his twenties when Hajime No Ippo was published and he?s over 50 now. There?s a massive difference in life experiences between your twenties and your fifties, and I can?t imagine how Morikawa?s perspective has changed in the decades of publication. Morikawa is closer to the coach?s age now than he is to Ippo?s age, and there?s no one alive that makes it to that age without regrets and missed opportunities. For half his life, Morikawa has been creating the story of a group of boxers aiming for the top. While it?s easy to imagine as a young adult that the world is your oyster, someone in his fifties knows better. Not everyone who wants to win actually does. There are hundreds of talented individuals struck down by disease or calamity who never get the chance to compete on the world stage. Worse, Morikawa?s been slowing down in recent years as he battles his own illness. As sad as it might be, Morikawa might not be able to tell the entirety of the story he?s been writing for over half of his life. The parallels between the creator and the protagonist are heart-breaking, and it?s not a stretch to say that Ippo?s chapter-long internal apology to his coach for not being able to keep boxing doubles as an apology to the readers. It?s a bitter twist to the plot, but it?s also inarguably true to life.

Not everyone who tries succeeds and it?s the rare individual who?s able to turn his dreams into reality. For Ippo, and for many of his readers, the sudden intrusion of real life and bad luck is a punishing reminder of the universe?s apathy. It?s also the kind of story that couldn?t be told any other way; to really nail the tragedy of the twist, Morikawa needed the unbroken decades of storytelling, the larger cultural context and expectations of shonen manga, and the larger interest in the supporting cast to trust that Ippo?s end doesn?t mean Hajime No Ippo?s end. Sometimes even the best and brightest among us fail, and that?s just as important a story to tell as stories where hard work and determination can give you the world.