Home
/
News
/
Disappearance in a Small Town: What Happened to Karlie Guse? Karlie Lain Guse has been missing since October 13, 2018, from Mono County, California.

It has been over a year since California teen Karlie Lain Guse, 16, was seen at her home in Chalfant Valley, California. She disappeared in the early morning hours on Saturday, October 13, 2018. Her disappearance has sent chills up the spines of the quiet residents in her small town and drawn national attention from media. The case has also been the subject of suspicion and accusations. Chalfant Valley is a small rural community that sits east of the Sierra Nevada and Nevada in eastern California.

Chalfant Valley is a small community with a population of 650 people and located on the abandoned Southern Pacific Railroad in Mono County, approximately 14 miles north of the City of Bishop on U.S. Route 6. The county sits east of the Sierra Nevada between Yosemite National Park and Nevada. Most people commute to Bishop for work and school.

Karlie lived in a modest home with her father Zachary Guse, stepmother Melissa, and two younger brothers, ages 9 and 10. Karlie?s parents were divorced when she was just a toddler and as a young teen, wanting to stay near friends and family, Karlie decided she wanted to live with her father because her mother was moving to Nevada.

Karlie is described by friends and family as sweet, funny, and popular. Karli was a good child and her mother, Lindsay Fairley, has said she and her daughter were best friends.

In the days before her disappearance, Karlie would begin having what one friend described as ?episodes? and terrified someone was tracking her on her phone.

The Night Before Karlie?s Disappearance

The night before Karlie?s disappearance, she asked if she could go to the football game at school and given permission to go by her parents. However, Karlie would never make it to the game and instead went to a house party with her boyfriend Donald Arrowood III. At approximately 8 p.m. Karli?s stepmother Melissa Guse called Karlie on her cell phone asking if she needed a ride home from the football game. At first, Karlie replied, ?No,? and said she would get a ride home from her boyfriend.

This is where her story takes a bizarre turn. Something happened at the party that night that horrified Karlie.

While at the party while everyone was having a good time, Karlie began to panic, becoming frantic and impossible to console. ?She got scared of the music, she got scared of me,? her boyfriend Donald would later say.

Karlie would call her stepmother less than an hour later begging her to come to pick her up from the trailer park. ?Never mind, hurry up, I changed my mind, come get me, I?m booking it down Dixon Lane. Hurry! Hurry! I?m scared.?

Melissa immediately left her home and frantically drove towards ?town,? located miles away from the family rural home on the outskirts of Bishop, about 14 miles away.

Melissa recalls Karlie did not want to get off the phone and adamant that she wanted to be picked up immediately.

When Melissa arrived at the trailer park where Karlie was supposed to be, she was not there. After searching for Karlie, Melissa spotted a light and found Karlie almost a mile away running down the street, with only her cell phone to light her way in the pitch dark. When Melissa stopped, Karlie quickly jumped into the back seat of the car and began telling her stepmom she was scared.

?She was really pale. She looked like a ghost, her pupils were really dilated,? said Melissa. Karlie Guse attended a party and left in a panic.

Karlie?s father Zachary arrived home from work and sat down for a couple of beers when Melissa walked in with Karlie who was acting erratically. He described his daughter as huddling in a corner freaking out one minute, then telling her parents how much she loves them the next. Zachary went on saying Karlie was particularly afraid of her phone and her parents getting to close to her.

Her parents kept asking her what was wrong, but Karlie kept telling them she didn?t know.

According to Melissa, Karlie admitted to smoking marijuana while out with her boyfriend and friends. Melissa described Karlie as ?acting paranoid? as a result of something she had taken or smoked that night at the party.

Melissa refrained from taking Karlie to the hospital and would later say she did not feel Karlie was in immediate danger.

Melissa said she eventually calmed Karlie down and she begged Melissa to hang out with her in her room to paint their toenails, color, and read the bible. Melissa claims she slept in her bedroom that evening to try to help keep Karlie calm, describing her mental state as a complete rollercoaster.

Karlie had recently been suspended from school and had to attend counseling on the school campus for using marijuana at school. Melissa decided to take out her cell phone and secretly began recording Karlie with the intention of later showing Karlie her behavior while intoxicated.

According to Fox News, on the recording that was 8 minutes and 45 seconds long, Karlie can be heard saying she didn?t want to sleep in case she was killed, and asking if her stepmother was going to call 911. The recording also showed Melissa calmly talking Karlie down.

?I had spent the whole night with her in her room, and when I woke up, she wasn?t next to me anymore,? said Melissa. Melissa said she panicked when she could not find her stepdaughter in the home.

The front door was slightly ajar, but Karlie was nowhere to be found. Karlie was never seen again. She vanished without a trace. Police later reported that Karlie had been seen walking in the direction of U.S. Highway 6. After the official search for Karlie had ended, private search parties set out to crisscross the high desert and probe the nearby White Mountains, according to the Las Vega Review-Journal.

The FBI combed Karlie?s cell phone, which was still at her house the morning she vanished. They also searched for her digital footprints online.

Posters of Karlie went up in grocery stores, gas stations and diners across eastern California.

?We have done search warrants. We have done data dumps of all her electronic devices. We?ve interviewed everyone that?s related to her,? officials told News 4.

Starting with the first day after Karle?s disappearance, Melissa live-streamed updates about the search on Facebook. With videos circulating, what seemed like a desperate mother searching for her stepdaughter, almost immediately became the source of speculation and ridicule from the public. The story about Karlie?s disappearance has been widely debated.

?One thing that bothers me as a licensed psychotherapist is the stepmother?s eyes shift constantly which indicates she?s lying,? read a YouTube post by Francine Hartsog, 52, of Davidson, North Carolina.

Total strangers and ?armchair detectives? began diagnosing and criminal profiling the case and everyone involved.

Even Karlie?s biological mother doubted the statements Melissa made about the disappearance of her daughter.

?I?ve been hearing about four or five stories now, she told Nancy Grace.

On a 2019 episode of ?Dr. Phil,? Karlie?s mom said, ?I believe my daughter had a fatal drug overdose . . . and I believe that very early morning, Melissa saw her with her eyes open, and I think that?s when my daughter passed.?

When the Review-Journal asked Lyndsey Fairley to explain the basis of these allegations, Fairley responded in an email that read: ?Please send me a list of questions you have for me and I?ll run them past my attorney.?

?Karlie?s bedding wasn?t taken and analyzed,? Boone said. ?No search warrant was served on the cars.?

Melissa has continued to deny any involvement in Karlie?s disappearance.

?It feels awful,? commenting about the allegations. ?When Karlie went missing that day, everything happened so fast . . . She?s not dead; she is missing.?

Shortly after Karlie?s disappearance, the Mono County Sheriff?s Office issued a statement that she ?was last seen in the early morning of Saturday, October 13, 2018, in the White Mountain Estates in Chalfant, walking toward Highway 6.? Richard Eddy, a retired motorcycle officer who lives down the street from Guse?s house, told police that early in the morning on October 13, 2018, he saw a thin female with long hair walk by his house. She was ?looking up, looking around at the sky.? Eddy said she had a piece of paper in her hand.

?It?s kind of unusual,? said Eddy. ?We don?t have a lot of kids out walking.?

Another neighbor named Kenneth Dutton, also lived down the street and around the corner, about seven houses away from the Guse home. Dutton told the Review-Journal that he saw Karlie walking through the neighborhood that Saturday in the morning. He said he recognized Karlie and also said she had a paper in her hand.

A third witness who was heading out to cut firewood reported seeing a girl fitting Karlie?s description in the vicinity of Highway 6, mysteriously standing behind a barbed-wire fence. 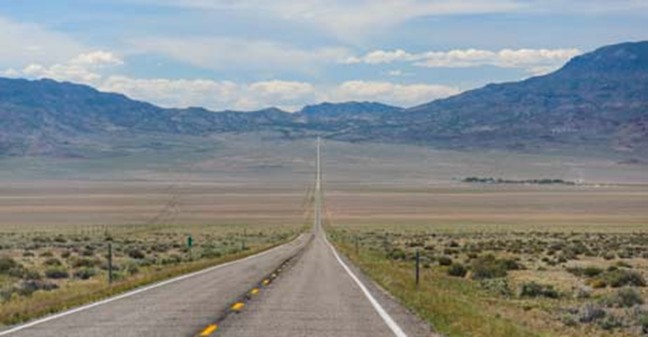 The lonely two-lane Highway 6 in Nevada is one of the most deserted roads in the country.

The two-way highway runs toward Bishop and leads north into the most deserted of Nevada?s landscape and frequented by truckers.

Despite similar eyewitness accounts seeing Karlie walking through her neighborhood, it has not lessened the speculation online.

?It wasn?t Karlie,? wrote Amanda Earls of Knoxville, Tennessee. ?It was Melissa running around in hopes people would think it was Karlie. Karlie was long dead by then.?

When a reporter asked what information supports Earl?s statement on YouTube, she responded, ?I don?t have any . . . This is just what I?m coming up with.?

Sheriff Ingrid Braun told the Review-Journal that her office does not have a theory as to what happened to Karlie and remains open to all possibilities. ?Nobody has been cleared of anything,? Sheriff Braun said. ?Right now, I don?t even have a crime to clear them of.?

When asked about the statements on social media, Sheriff Braun said, ?Most of them don?t appear to be locals. The anonymity of the keyboard draws people who think they can solve crimes from afar.?

So far, no one has been charged with Karlie?s disappearance. ?We are treating the investigation as we would a crime,? said Sheriff Braun.

If you have any information about the disappearance of Karlie Guse, please contact the Mono County Sheriff at 760?932?7549.