According to Tempe Police, Salinas and her roommates threw a party at their apartment on Hardy Drive and 5th Street in Tempe on June 15.

After getting into an argument, Salinas and her boyfriend left the party early. Both planned on going to his home in Scottsdale. However, her boyfriend went home alone. Not much later, Salinas decided she would drive herself to her boyfriend?s home. She packed a bag and left her apartment. However, she crashed her car along the Rio Salado Parkway and Ash Avenue curve not far from her home. She had flattened both tires on the driver?s side, so she drove the car to Brown Street, parked, and walked approximately one block back to her apartment. Police confirmed Salinas had ditched her vehicle, walked back home, changed her clothing, then called a cab to pick her up at an AM/PM convenience store about a quarter-mile away from her apartment.

According to friends, she left her purse and keys at her apartment. Jaycee Park in Tempe, near where surveillance cameras caught a woman resembling Adrienne Salinas walking the night she vanished.

A surveillance camera caught a woman resembling Salinas walking near the corner of Hardy and University Drive through an O?Reilly Auto Parts parking lot at 4:52 a.m. In the footage, she seemed to be followed by a dark four-door vehicle driving through the same lot approximately two minutes later. The vehicle remains unidentified.

Cell phone records show Salinas?s boyfriend had 11 missed calls from Salinas at 4:15 a.m. to include a voicemail stating she was on her way to his home.

The boyfriend has been very cooperative and was cleared through cell phone records, also passing several lie detectors tests.

The taxi driver was also cleared and has never been a suspect.

A Victim of Opportunity

A young girl walking alone on a hot June night in 2013, possibly there was someone else nearby, someone evil. When you have a case like this there will be nights and nights and nights that you don?t sleep. You only think about the case. What we have done, what we could do, and what should we have done,? Detective Alan Akey, told News 15 in an exclusive interview, ?Adrienne Salinas found dead 4 years ago, case remains unsolved.?

According to published freelance journalist Keen Azariah, she may have crossed paths with ?ultimate evil? that fateful night.

On August 9, 2013, Apache Junction resident Dan Kelly decided to check his property after the flooding. His land borders Lost Dutchman Boulevard and Weekes Wash. It was here that he found the decomposing remains of Salinas, in a desert wash, approximately 30-miles away from where she had vanished in Tempe.

Police believe Salinas?s body was dumped elsewhere and was later washed downstream to the location she was found. 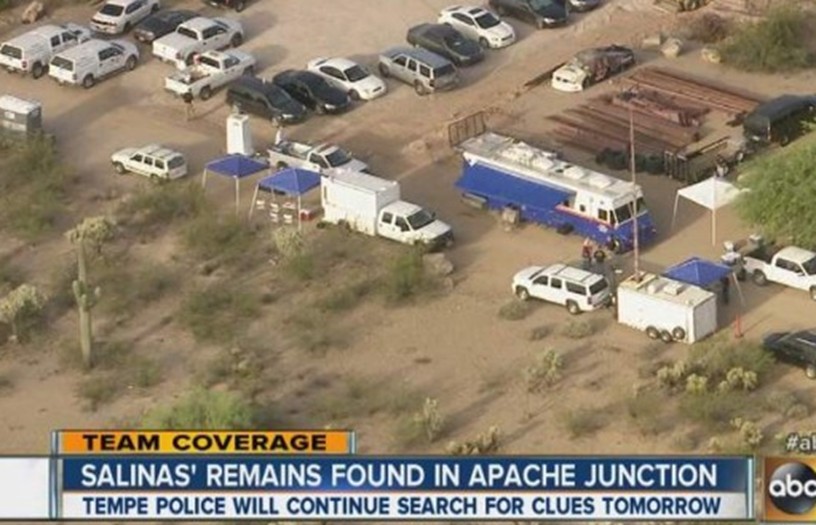 Police search the Apache Junction wash for evidence related to the murder of Adrienne Salinas.

When the Tempe Police Department released the heavily redacted autopsy report, the skeletal chart was not included. As reported in the New Times, ?Much desiccated skin and tissue are present, as is a small patch of hair adhering to what appears to be desiccated skin of the neck.? The information in the autopsy reports does not include any information about a skull, hands or clothing.

In fact, the autopsy report specifically indicates that Salinas was identified through the identification of her thorax (between neck and abdomen, in addition to DNA identification.

The missing information makes one suspect she might have been decapitated either by human hands or by the natural process of decomposition and exposure to harsh elements of rushing water in the wash, followed by intense heat and potential animal scavenging.

If authorities know the cause of death, they haven?t released it.

Was Salinas a victim of opportunity? It just so happens, a monster was close by.

Bryan Patrick Miller is myriad of things in his social media profile, a man obsessed with Steampunk and role-play, driving a decommissioned police cruiser and calls himself the ?Zombie Hunter.? He is also an alleged serial killer. Melanie Bernas and Angela Brosso killed along the Arizona Canal in 1992.

Miller is currently being held in a Phoenix jail for his DNA confirmed involvement in the cold-case murder, decapitation, and evisceration of Angela Brosso, 22, and the stabbing and mutilation murder of Melanie Bernas, 17, ten months apart, while riding their bikes along a North Phoenix canal, in 1992.

According to Facebook posts, Miller just so happened to be at a friend?s party in Tempe on Saturday, June 15th, near where Salinas went missing.

According to ?Gone by Dawn: The Disappearance of Adrienne Salinas,? by Keen Azariah, a published freelance journalist and former friend of Miller, not only was Miller at a party within one mile of Salinas?s home, but he had also planned on going on a morning hike. Miller had also posted this information on Facebook.

Distance between the party Bryan Patrick Miller attended and where Salinas was known to be walking. Source: Keen Azariah.

Some may think it?s a jump, but Miller owned a dark gray Ford Focus hatchback and a matte black Ford Escort. He sold the Focus in September 2013, and purchased a 2007 Ford Interceptor (decommissioned police car) that he transformed into a creepy police car, complete with lights on top. On the back was the name ?Zombie Hunter,? his alter ego. When police made the arrested Miller at his job at Amazon, for the murders of Brosso and Bernas, they simultaneously served a search warrant on his home. Police found the matte black Escort under a black tarp hidden in the backyard of his North Phoenix residence.

While that is not proof that Miller abducted Salinas, we must also take into consideration that Miller also worked at the Arizona Renaissance Festival in Apache Junction near where Salinas was found, attended Steampunk events at Goldfield Ghost Town, and even selected the area to do some professional photo shoots. Bryan Patrick Miller and other Steampunk enthusiasts at professional photo-shoot in Apache Junction.

Though the inferences of a connection between Miller and Salinas are circumstantial, the leap continues to get shorter.

For those who know Bryan personally, it becomes even more possible to believe he was capable of abducting a young woman. Known for collecting realistic photographs of dead bodies, posting cannibalistic connotations on Facebook, to include pictures of decapitated and mutilated women. Brandy Myers vanished in 1992 from North Phoenix. Family believes she was a victim of the Miller.

And if all of this were not enough, Miller lived less than a mile from Brandy Myers who has been missing for over 25 years.

Brandy Myers had gone out on the afternoon of May 26, 1992, to go door to door raising money for her school. She never returned home.

Myers?s younger sister Kristin Thelen recalled walking with her big sister on their way to school and back, on a route that took them right by Miller?s house each day.

?Ultimately, we have another disappearance of a young girl, same kind of age and time frame, and very close proximity to his home,? said Sgt. Trent Crump with Phoenix Police Department. ?He very quickly became an investigative lead.?

Miller then told his wife he dismembered the little girl and dumped her in the garbage that was picked up the following day in 1992. It so happens Brandy Myers did have diminished mental capacity.

Miller has pleaded ?not guilty? in the murders of Brosso and Bernas. Miller would be quick to say his being near where women and little girls vanishing is ?just coincidence.? Others would say there are too many coincidences to dismiss.

A $20,000 reward is being offered for information that leads to the arrest and convictions of the individual(s) responsible for the murder of Adrienne Salinas. Call Silent Witness at 480-WITNESS.