As soon as you step outside the Scientology bubble and consider the numbers from other sources, the figures shrink dramatically.

You actually have to shift decimal points.

Scientology?s claims for its membership are sometimes more than 100 times larger than the results of more objective estimates.

Take, for example, the three American Religious Identification Surveys carried out between 1990 and 2008.

Their work is sufficiently well-regarded to have been picked up by the U.S. Census Bureau. (U.S. law restricts how the Bureau can go about asking people about their religious loyalties.)

As the survey explained, its researchers simply asked respondents: ?What is your religion??.

The key point about this methodology, for our purposes at least, is that this survey was not based on data supplied by the churches or movements themselves? this was self-reported data.

The responses they got suggested that there were, in all, 45,000 Scientologists across the United States. Yet three years later, in 2004, Scientology was claiming four million there ? this time, in a 2004 report in the Deseret News (Utah).

Dr. J. Gordon Melton, director of the Institute for the Study of American Religion ? not generally known as a fierce critic of Scientology ? expressed scepticism.

If they did have such numbers, he told the paper, they would be showing up on national surveys.

He has a point. Scientology has yet to explain why their claims differ so radically from the numbers in the U.S. survey.

The 2008 ARIS survey did not list Scientologists separately, but grouped them in with 11 other movements.

?The category of the New Religious Movements and Other Religions is a mixed one and includes many groups often referred to as cults,? the report noted. Italian researcher Massimo Introvigne has suggested that ?? one can speculate that Scientology was a component of this growth?.

Certainly, that is possible: the question is, to what degree?

As this table shows, Scientology ? at least when last listed separately, in the 2001 survey ? was not the largest movement in the new 2008 category: far from it.

Introvigne noticed that a New York Times report claimed Scientology had only scored 25,000 in the 2008 ARIS report, even though this figure appeared nowhere in the document.*

He contacted the main author of the ARIS survey, Professor Barry Kosmin, to find out what was going on. Kosmin replied:

[ W]e never reported adherent figures for small religious groups in ARIS 2008 because of their unreliability. We were approached by several scholars and media outlets interested in Scientology. Our informal response ? caveat emptor ? was that our data suggested 25,000 +/- 300,000.**

The key point here is that the smaller the numbers get, the harder it is to give an accurate figure: hence the wide range for the upper and lower levels of the estimate.

If Scientology?s numbers rose in line with the 58-percent increase registered in this category overall, they would be up from 55,000 to around 87,000.

But let?s assume, for the sake of argument, that the upper limit is true; that there were around 355,000 Scientologists in the United States in 2008 ? a remarkable 545-percent jump from the 2001 figure.

That is still a fraction of the numbers Scientology was claiming around this time. 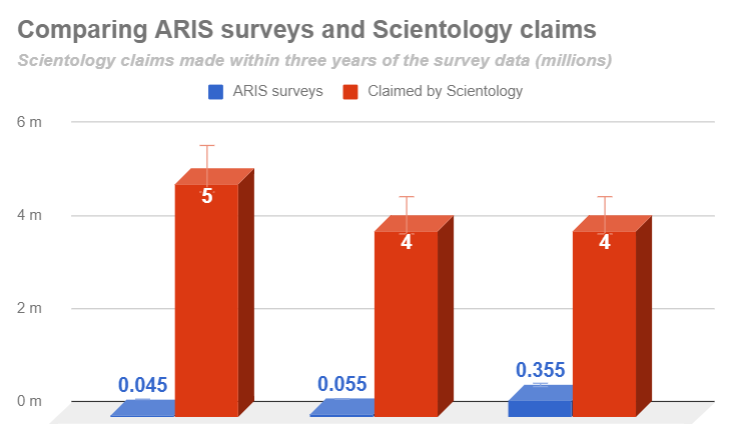 For just a year earlier, Scientology had again claimed four million followers in the U.S. ? this time in comments to the Kansas City Star.

The disparity between the rival figures is so large the ARIS survey results barely register on a chart.

It?s a similar story in other countries.

In Britain, the 1971 Foster Report into Scientology noted (p25):

In answer to my first questionnaire, the Scientology leadership told me that there were now probably upwards of 150,000 people in this country who would call themselves Scientologists, with about 200 new members joining every week.

Nevertheless, 28 years later, when the Charity Commission handed down its 1999 ruling denying Scientology charity status, it could only report: ?There are said to be about 200,000 adherents in this country.?

Evening Standard (London) (with thanks to the Standard for the cutting)

In 2006, Evening Standard reporter David Cohen pulled off the exploit of getting two sets of figures for UK membership.

Janet Laveau, UK spokewoman, told him: ?We have 118,000 members in the UK, almost half of whom live in London? ? and they would double their membership in five years, she added.

When he posed as a potential recruit however, London communications outreach officer Tracey Coleman told him they had 8,000 in Britain.

By 2011 however, most of them appeared to have left Britain. The census of England and Wales recorded only 2,418 Scientologists.

That was even fewer than the 176,132 people claiming to be Jedi ? as the British press took great delight in pointing out.

It was also fewer than:

The Office of National Statistics produced a handy graphic that helps put Scientology?s numbers in their proper perspective.

You?ll need to scroll down a bit.

The ONS dataviz on religious beliefs

And no, they hadn?t all moved to Scotland: their 2011 census recorded only 188 Scientologists; Northern Ireland?s, just 44.

Across the United Kingdom then, the 2011 census data recorded a total of 2,650 Scientologists.

That didn?t stop Graeme Wilson, Scientology?s UK spokesman, from telling The Independent newspaper in 2013: ?The church currently has 118,000 members in the UK, 15,000 of whom are active participants.?

Finally ? and briefly ? to Australia, where campaigners managed to get the ABC to correct a 2009 report that suggested there were about ?a quarter of a million members? there.

These figures should have been attributed to the Church of Scientology which says it based the number on its mailing list. The 2006 census found the number of Australians identifying themselves as Scientologists to be 2,514.

Scientology?s claim then, compared with the census data, was out by a factor of about a hundred.

And the 2016 census figures turned out to be even lower: they reported only 1,681 adherents.

Next time, we?ll look at some of the internal Scientology numbers that probably give a more accurate picture of worldwide membership than its official claims.

UPDATE: * Veteran Scientology-watcher Hartley Patterson contacted me to point out that while ARIS did not print individual figures for Scientologists in its 2008 survey, the US Census Bureau did, using the ARIS data. Here?s how the US Census bureau presented the figures? until taking this page down. Why?

The curious thing is that, somewhere between September 2015 and January 2017, they took the figures down again. I?ll try to find out why, but in the meantime, here are the figures as originally posted, courtesy of the Internet Archive.

** Professor Kosmin confirmed to me that this was his position.

The series so far: