Bryce Laspisa, 19, vanished in the summer of 2013 while returning to his parent?s home in Niguel Laguna, California. A resident of Rocklin, California, his vehicle was found abandoned in a remote desert park in northwestern Los Angeles County. Bryce was born on April 30, 1994, to Michael and Karen Laspisa. Bryce grew up in Illinois, graduating from Naperville Central High School in 2012. He then moved to Laguna Niguel with his parents.

Bryce?s friends and family describe him as lighting up a room when he walks in, a happy guy and a gentleman.

A good student and talented artist, Bryce attended Sierra College in Rocklin, California, about seven hours from his parent?s home in Laguna Niguel. Bryce studied graphic and industrial design and his work highly recognized with an extensive portfolio.

A young man with a bright future ahead of him.

Friends of Bryce began seeing a significant change in his behavior. It was so concerning, a friend of Bryce?s called Bryce?s mother. Something was clearly troubling him, but he hadn?t talked about it to anyone.

According to the friend, Bryce began acting strange while taking ADHD medication. He began staying up all night playing video games.

On August 28, 2013, Bryce had driven to Kim?s home in Chico, approximately 2 hours from his apartment in Rocklin. There both he and Kim called Bryce?s mother.

According to Investigation Discovery, Kim had tried to take his keys away because she was concerned for him. She insisted that she didn?t feel he was well enough to drive.

?He told both of us the same thing,? said Bryce?s father Michael. Bryce told them he had broken up with Kim and she wouldn?t give him the keys but told his parents he was fine.

?I told Bryce to let me fly up there,? Karen said. Bryce responded, ?No, don?t make an airline reservation until I talk to you because I have a lot to talk to you about.?

Karen asked Kim to return her son?s keys and Bryce left at 11:30 p.m. and said he was heading home to Rocklin. He called his mother on the way. The call came in around 1:00 p.m. on August 29. Karen assumed Bryce was already at his apartment, but he wasn?t.

Later, cell phone records would indicate Bryce passed his school in Rocklin and was headed southeast toward the Castaic Mountains over 300 miles away.

The following morning, Bryce?s parents received a message from their auto insurance, informing them Bryce?s car needed roadside assistance. Karen immediately called her son?s roommate who told her Bryce had not come home the night before.

Mike and Karen also discovered a credit card charge from Buttonwillow, California, along Interstate 5. A few hours from Niguel Laguna, his parents thought he was headed to their house.

Another charge popped up at Castro Tire and Truck Repair near the interstate. Mike contacted the shop and they told him Bryce had run out of gas. They delivered 3 gallons. Bryce happened to be still at the shop, so the man put him on the phone with his parents. Again, Bryce told his mother nothing was wrong. He said he was going to get gas and was actually on his way to their house and would be there that afternoon. Michael and Karen made a police report to Orange County Sheriff?s Department at 6:00 p.m. that evening.

After receiving the report, the sheriff?s department pinged Bryce?s cell phone and discovered him along Interstate 5, where they searched his car and conducted a sobriety test. Officers felt Bryce was acting normally with no sign of alcohol or drugs and told him to call his mother. He was hesitant but the deputies dialed her number and put him on the phone. Again, he told his mother he was fine, so his parents were confident he was really on his way to their house this time.

Reaching for straws, his parents called the tire and repair shop again and begged them to go where Bryce had last been seen. Knowing how worried his parents were, the man at the shop drove there to check and found Bryce was ?still? at the spot the deputies had left him.

Bryce stayed in touch with his parents over the next few hours. August 30, at approximately 2:09 a.m. Bryce told his mother he was going to pull over for the night and get some sleep.

That was the last time his mother would hear from Bryce. Bryce?s car was found at the Castaic Lake Recreation Park crashed at the bottom of a 25-foot embankment near the lake?s main entrance.

The officer proceeded to inform Michael and Karen that the car had been found overturned at 5:30 a.m., at the Castaic Lake Recreation area, two hours north. It had crashed near the lake?s main boat access road and found at the bottom of a 25-foot embankment.

According to the officer, the back window had broken out from inside. Some of Bryce?s personal belongings were found inside the car to include his laptop and phone. His wallet and duffel bag were found outside.

Bryce?s blood was also found on the headrest on the passenger side of the car. However, police determined there was no evidence that he had incurred a serious injury from the wreck.

Police had examined the scene and concluded Bryce had more than likely pulled off the service road that morning and heading to the rest area.

From there, what happened to Bryce remains a mystery. In the initial days that followed Bryce?s disappearance, Los Angeles County Sheriff?s Department conducted a massive search of the area and swept the bottom of the reservoir. Divers and helicopters searched for any trace of the young man, along with searchers on foot, horseback, and all-terrain vehicles.

Deputies also searched San Francisquito Canyon and surrounding areas with a helicopter and search dogs. Hundreds of volunteers searched the hills and the paved access road that leads to the lake. On September 4, 2013, a jogger found a burning body on Lake Hughes Road, near Castaic. Police determined the body was not Bryce.

After weeks of searching, on September 18, authorities called off the search. ?We searched all areas of the lake and didn?t see any signs,? said Deputy Johnnie Jones of the Los Angeles County Sheriff?s Department Parks Bureau.

According to the Orange County Register, the case was turned over to the department?s homicide bureau that handles missing person cases. Bryce Laspisa with his parents Karen and Michael Laspisa of Niguel Laguna, California.

The Minutes Are Excruciating

Every time an unidentified body is found in Los Angeles County, Karen calls the detective to see if it?s her son. Then, Bryce?s parents sit for days sometimes, just waiting for an answer.

For over 6 years the answers from the detective have been the same. Bryce has not yet been found.

?Bryce is in the database,? Karen said. ?The DNA is there, the dental records are there, the fingerprints are there. If remains are found, we know he would be identified.?

?We still have a tip line and we still get phone calls,? Karen told the Santa Clarita Valley Signal during a 2016 interview. A Facebook page FIND BRYCE LASPISA was set up shortly after his disappearance and now has nearly 30,000 followers.

Karen and Michael?s life have gone on hold. The search for Bryce has wound down. No additional clues have surfaced.

As of April 30, 2018, there were nearly 87,000 active missing person cases listed in the National Crime Information Center (NCIC) at the Federal Bureau of Investigation, some dating back decades.

In California, there were 19,413 active missing person reports in NCIC.

Throughout the country, AMBER and Silver Alerts are used but Bryce did not fit the criteria to have a public notification sent out. A part of the police investigation that concerns Bryce?s father.

?There is a category in the middle that doesn?t have extra procedures in place because they feel, as an adult, the person could be doing this on their own,? said Michael.

For the most part, police have treated Bryce?s disappearance as voluntary. 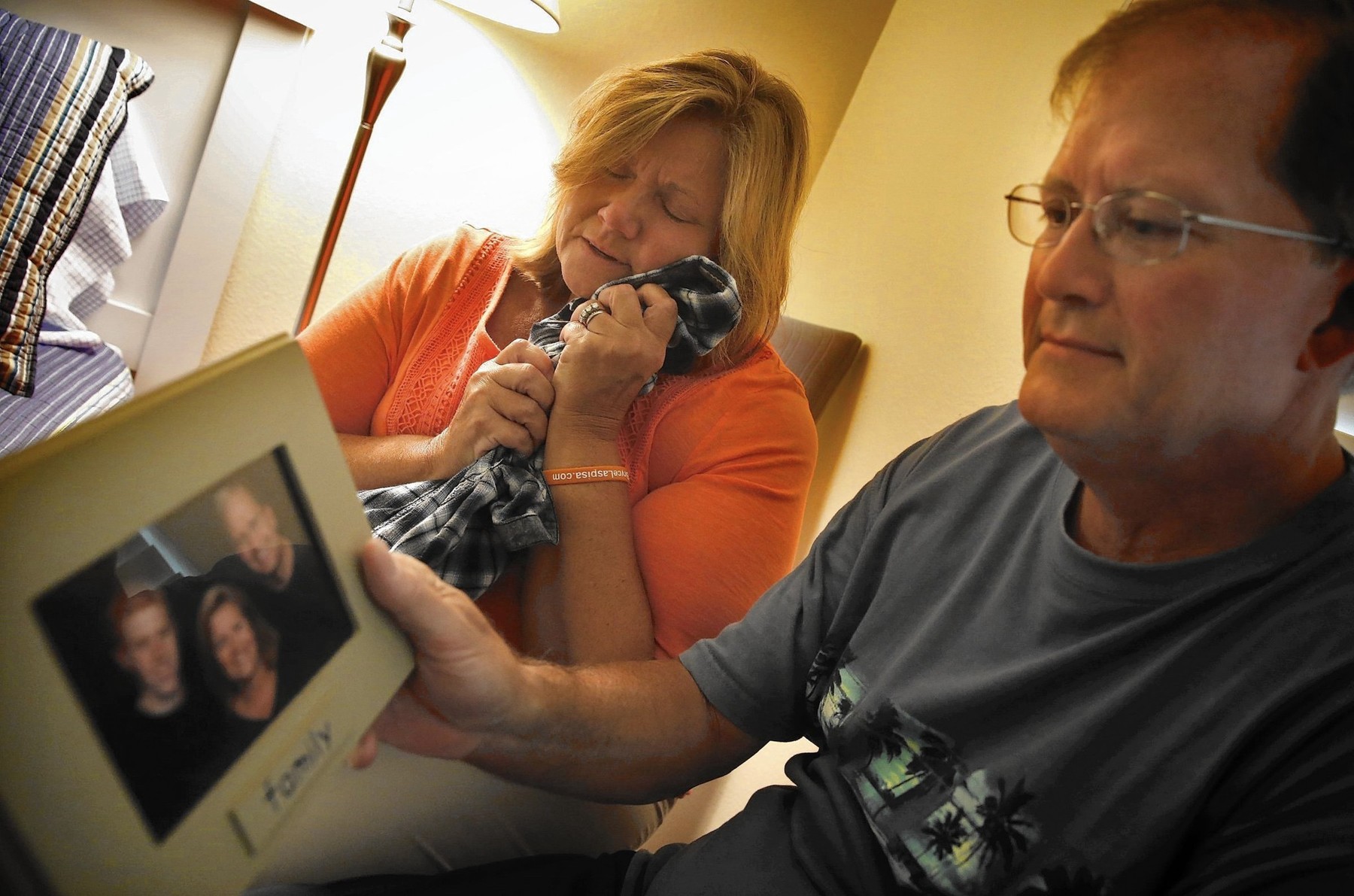 Michael and Karen Laspisa hold a photograph of their missing son Bryce Laspisa in 2015. Photo courtesy of Chicago Tribune.

Even though Bryce?s parents disagree that Bryce is willingly missing, they are mostly pleased with the help they have received.

They feel Bryce is out there somewhere.

His behavior prior to his disappearance and the potential of a head injury sustained in the accident only fuels the fire to find their son. With the outpouring of support, along with their deep faith, they trudge on through the days of lonely ambiguity.

?We have heard stories of people that have been missing for years and have been found,? Karen said. ?That?s always our hope that we keep the faith that Bryce will be found or that we can get closure of some sort.?

If you have any information about the disappearance of Bryce Laspisa please call the Orange County Sheriff?s Department at 714?647?7040.