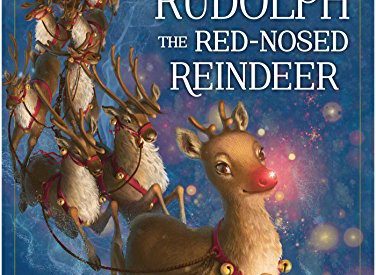 When I was little, one of my favorite parts of Christmas Eve was having my mom read short stories to us. Now that I?m older, I can?t wait to have little ones of my own to pass this tradition down to.

The following 8 stories were some of my favorite Christmas classics growing up. I hope you enjoy them just as much with your family this Christmas Eve! had a very shiny nose

and if you ever saw him

you would even say it glows.

All of the other reindeer

used to laugh and call him names.

Robert L. May wrote Rudolph the Red-nosed Reindeer at the request of the department store company Montgomery Ward. The story was given out for free to over 2 million children who visited the stores during Christmas time of 1939. Robert?s brother-in-law, Johnny Marks, saw the popularity of the story and wrote the song we all know and love. From there, the story took off and now we can?t imagine Christmas without our best bud, Rudolph. ?The magi, as you know, were wise men ? wonderfully wise men ? who brought gifts to the newborn Christ-child. They were the first to give Christmas gifts. Being wise, their gifts were doubtless wise ones. And here I have told you the story of two children who were not wise. Each sold the most valuable thing he owned in order to buy a gift for the other. But let me speak a last word to the wise of these days: Of all who give gifts, these two were the most wise. Of all who give and receive gifts, such as they are the most wise. Everywhere they are the wise ones. They are the magi.? -O. Henry

A Gift of the Magi is a beautiful short story about the personal sacrifices we are willing to make for the ones we love. ??Rejoice in thy youth,? said the sunbeam; ?rejoice in thy fresh growth and in the young life that is in thee.?? -Hans Christian Andersen

The Fir Tree is a fairy tale by Hans Christian Andersen. It tells the story of a young tree that wants nothing more than to grow up. In focusing so much on the future, the tree forgets to truly appreciate the present. This a great reminder for children and adults alike. ?Change me back,? George pleaded. ?Change me back ? please. Not just for my sake but for others too. You don?t know what a mess this town is in. You don?t understand. I?ve got to get back. They need me here.?

?I understand right enough,? the stranger said slowly. ?I just wanted to make sure you did. You had the greatest gift of all conferred upon you ? the gift of life, of being a part of this world and taking a part in it. Yet you denied that gift.?

The Greatest Gift is a short story written by Philip Van Doren Stern in 1943. A suicidal man named George Pratt stands on a bridge on Christmas Eve, ready to jump. Before he can, an odd man approaches him and strikes up a conversation. George admits to the man that he wishes he had never been born. The man tells George that his wish has been granted, and upon returning to his town, George finds that no one recognizes him. After the initial shock, he realizes just how much he values his life and learns that to throw it all away would be a waste.

Fun Fact: This story became the basis for the classic film It?s a Wonderful Life (my all time favorite movie).

5. The Elves and the Shoemaker ?As soon as it was midnight, there came in two little naked dwarfs; and they sat themselves upon the shoemaker?s bench, took up all the work that was cut out, and began to ply with their little fingers, stitching and rapping and tapping away at such a rate, that the shoemaker was all wonder, and could not take his eyes off them. And on they went, till the job was quite done, and the shoes stood ready for use upon the table.?

The Elves and the Shoemaker is a classic fairy tale by the Grimm brothers. One morning, a shoemaker comes into his shop to find a beautiful pair of shoes has been made for him to sell. Astonished, he determines to find out who he should thank for the service.

6. How the Grinch Stole Christmas! How The Grinch Stole Christmas! is a children?s story that, even as adults, we enjoy reading every year. Dr. Seuss is great at sneaking deep life lessons into his stories, and in this tale, he demonstrates that Christmas is a spiritual experience, not a material one. ?Seeing is believing, but sometimes the most real things in the world are the things we can?t see.? -Chris Van Allsburg

In the middle of the night, a young boy is awakes to the sound of a train pulling up outside his house. The train is full of children and it takes them to the North Pole where he gets to meet Santa Claus. This book was turned into a fantastic film that we also recommend checking out.

8. Twas the night before Christmas ?Twas the night before Christmas, when all through the house

Not a creature was stirring, not even a mouse;

The stockings were hung by the chimney with care,

In hopes that St. Nicholas soon would be there?

Although commonly referred to as ?Twas The Night Before Christmas,? this children?s Christmas poem is actually titled A visit from St. Nicholas. Like many of you, I?m sure, reading this on Christmas Eve is a family tradition. (If it isn?t already, then why not make it one?)

If you enjoyed this list, spread the Christmas cheer by giving it some claps or sharing on the socials.

What are some of your favorite Christmas stories? Share them in the comments below!

From the whole team at The Mission: We hope you have a very Happy Christmas Eve and Merry Christmas!