On January 3, 2011, ?Women Laughing Alone with Salad? was born?in the sense that it was on this day that a collection of stock photography, soon to become a viral phenomenon, was published on women?s website The Hairpin.

But really, it was born well before that date ? it was created over many years in cubicles, in water cooler conversations, in small meetings, in big meetings, and in grand unveilings to clients. It?s the child of marketing firms and brand consultants. It?s the pride and joy of neoliberal capitalism and post-millennial relations of production. It?s the spawn of an ideology that reinforces systemic inequality on a macro scale, and a vicious cycle of distorted desire, shame and self-loathing on a micro scale. Here?s a taste: 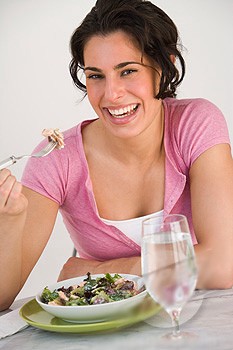 With this, a blog piece consisting only of insidiously similar stock images and no text whatsoever, Hairpin editor Edith Zimmerman struck a cultural chord. Blogs and Tumblrs followed. Think pieces followed. Women Struggling to Drink Water and Women Laughing Alone with Tablets followed. Writers, particularly women writers, jumped at the chance to contribute to the conversation, speak their truths, weigh on in the absurdity of Big Business? all-in approach to targeted marketing vis-a-vis leafy greens.

Why the salad? Why the laughter? Why the look of these women, their clothes, their poses, their fancy bowls and glasses? We know the answer, deep down ? unpacking and articulating that answer, however, is a different story. That?s where Sheila Callaghan comes in. Her play began as an exploration of these Women Laughing Alone with Salad ? their lives, their desires, their voices. It became a hilariously and beautifully rendered feminist deconstruction of what these stock photographs represent. With Women Laughing Alone with Salad, Callaghan brilliantly illustrates the ways in which these images enter into our daily lives, and their true cost to our happiness and our perception of the world and each other.

We hope you?ll join us this fall for Women Laughing Alone with Salad at Woolly. It?s our contribution to the inaugural Women?s Voices Theater Festival, a citywide celebration of new work by female playwrights from more than 50 professional theaters throughout the Nation?s Capital region, taking place in D.C. for the first time this fall, from September 18 to October 11.

We?re pretty excited about it. Almost as excited as this woman. You can get tickets to Women Laughing Alone with Salad here! It runs from September 7 to October 4, 2015.