Home
/
News
/
Why Frollo is my Favorite Disney Villain It may be surprising for some to be told that Frollo is the only one among them to have truly loved Esmeralda: The common reading, in any case, is that Frollo only loved her for her body, that he only has the most licentious desire for her. But this would be a mistake. Only Frollo truly grasped love in its true, and therefore most terrifying, dimension: He did not merely see Esmeralda as we commonly see people, that is, as reflections of our ego. When we try to understand someone, do we not merely project ourselves onto them, imagining what they would think if we were in their place? What they would feel? I have absolutely no doubt that Quasimodo viewed her only as an extension of the fantasies he had while trapped in the tower, as the beautiful, kind ?Disney princess? that we are all accustomed to ? and like Quasimodo, the half-formed, this idea of Esmeralda, or in fact any woman or person, as pure and blameless is an illusion. It is in this way that we should understand Quasimodo?s name. He is not half-formed meaning he is half-formed as physically (if anything, he appears overly formed), but he is half-formed in terms of his understanding of the world. He does not see the necessary darkness that underpins human kindness: This, ultimately, is Frollo?s crime against him ? not that Frollo was cruel to him: if anything, Frollo treats him like a son, and though he was cold and condescending, can we not say this about many fathers who nonetheless loved their children? Frollo was in fact too protective of him, allowed him to harbor illusions that mankind was mostly, if not entirely, good.

On the other hand, Frollo experienced love in its most Real dimension. Love is not at all like a romantic uplifting of the spirit, but a catastrophic invasion by the Other that insists upon itself, that cannot be effaced as a result of its uncompromising presence. We shouldn?t be surprised, therefore, that this love drove him into madness. He knew that love, when real, is absolute: Love, when a function of Truth, and therefore at its most brutal, follows no masters, not even God himself. This is why, in his beautiful, haunting song, ?Hellfire,? he says: ?God have mercy on her. / God have mercy on me.? He knew perfectly well that he was doing something evil. He had no illusions that he was doing something that was good or justified. This is true love: For when something serves no masters, it destroys reality, Ontology, itself. It implodes the categories of restriction and delimitation that makes Ontology possible in the first place. When Frollo fell in love, he grasped immediately this overwhelming dimension (no doubt he has read Aquinas, as a judge and learned man?) and knew that fidelity to love also meant his immediate displacement from any recognizable moral, ethical, or religious coordinates. This is why the film takes place in a religious setting: So that we may more easily see how Frollo is removing himself from a very obvious set of moral rules and conventions, in the form of religion.

Consider another modality of Truth: Politics. Is Revolution not also the assertion of the Real in this mode? In this sense, it easier to grasp Frollo?s self-destruction. Just as the ethical is suspended during Revolution (and subsequently, if the revolution is successful, reconstituted through new coordinates introduced by the incursion of the Real ? what Badiou calls the ?Event?), Frollo?s notion of good and evil, right and wrong, were put aside. 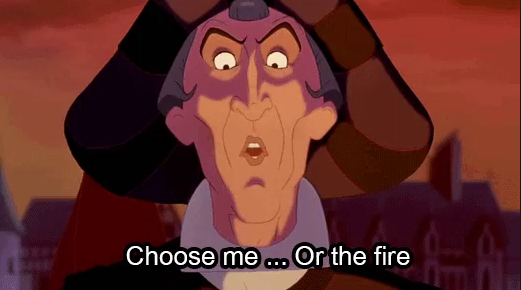 I am obviously not condoning attempted murder and mass destruction in the name of love: Just like Frollo, we should have no romantic illusions about these actions. Frollo is absolutely a villain, a monster. But at the same time we must appreciate that this story is ultimately a tragedy of someone who truly fell in love, so much so that he was driven mad by it: That is to say, when we fall in love, really fall in love, this is what we are liable to become. And this is why ultimately we will only love at the level of Quasimodo ? why our experience of love will almost always be merely ?half-formed.? True love is a terrifying, hellish thing, and to experience it and then be faithful to it is to be absolutely damned. To give one?s life to love is one thing ? but Frollo was prepared to give his soul.