In elementary school, we are taught translation, rotation, re-sizing/scaling, and reflection. The first three are used heavily in computer graphics ? and they?re done using matrix multiplication.

If you?ve ever done a 2D or 3D game?s UI, you might have encountered transformations. Tutorials elsewhere describe them very superficially ? they don?t dive into the mathematics on which those concepts were built. That works if you?re building fairly simple applications. At one point, it becomes necessary to just know it.

Here, I?m going to describe how transformations apply to points (and then objects) in a coordinate space.

A simple set of rules can help in reinforcing the definitions of points and vectors: Our n-dimensional vector space is described using the origin O(0, 0[, 0]). Any point can be derived as the sum of the origin O and a vector V.

I?m going to demonstrate how matrices can be used to translate, scale, and rotate any object consisting of vertices/control-points. Each transformation is applied to each point, rather than the object as a whole.

But, why should we use matrices for translation and scaling? After all, they are basic addition and multiplication operations on a 2D point. This is because of the associative property of matrix multiplication. You can multiply the matrices of multiple transformations to form one resulting matrix that can be directly applied on a point.

This is one reason why GPUs are optimized for fast matrix multiplications. In computer graphics, we need to apply lots of transforms to our 3D model to display it to the end-user on a 2D monitor. Those transforms are compiled down into one matrix which is applied to all the points in the 3D world.

As we?re going to be using matrices, a point needs to be represented as a matrix rather than an ordered set.

Before going into 3D space, we?re going to first handle the simple 2D case. A point in 2D space is going to be represented using matrices.

A point is essentially the multiplication of two matrices ? one describing the point?s coordinates and the other describing unit vectors and origin of the vector space.

Hence, we are going to shorthand the matrix form into one as:

P to P` in matrix form

It is counter-intuitive to think of ?scaling? a point, rather than an object. So let?s take a rectangle centered at the origin. We want to zoom in 2x; by intuition, we will multiply the coordinates of each point by 2 here. And it actually works. However, this doesn?t work in the case of an object that isn?t centered at the origin.

It will also translate the whole object away from the origin. The smaller rectangle is scaled directly 2x; the result is shifted to the top-right.

To solve this ?automatic shifting? problem, we do scaling in three steps:

Scaling Transform ? Instead of multiplying the coordinates of each point by the scale, we can instead use the following matrix: To complete all three steps, we will multiply three transformation matrices as follows:

Full scaling transformation, when the object?s barycenter lies at c(x,y)

The point c(x,y) here is the barycenter of the object. This is just the average of all the control-points.

2D rotation is fairly simple to visualize. It is done around the origin, where the clockwise direction is for positive angles.

High school math helps us here by telling us a point P(x, y) becomes P?(X, Y) after rotating through ?, where

Again, when we are rotating an object w.r.t its center, we must first bring its center to the origin via translation.

Rotating an object around its barycenter c(x,y)

If you work with OpenGL or WebGL, you?re going to work in a 3D vector space; hence, generalizing the previous three transforms into 3D space makes them a lot more useful.

Again, we must translate an object so that its center lies on the origin before scaling it.

Rotation is a complicated scenario for 3D transforms. Here, you need an axis around which you rotate the object.

Before generalizing the rotation for any axis, let?s do it around the x-, y-, and z-axes. After doing it with one axis, the other two will become fairly easy.

Generalization to any axis: An axis is essentially a 3D line. It can be characterized with a point A on that line and a vector L along the line.

To rotate P along an axis, we will make A that point that is the intersection of the axis and its perpendicular passing through P, i.e. the orthogonal projection of P on the axis.

To do the transformation, we will now translate A to the origin and then rotate the vector L along one axis (we?ll use the z-axis here). The original vector (unchanged). We must rotate as shown by the cupping arrow. The vector is projected on the x-y to increase clarity.

3. Now, we rotate the vector w.r.t the x-axis so that it is aligned with the z-axis. Now, we have transformed our coordinates so that our axis is aligned with the z-axis. We can apply the R(z) transform directly now, provided we have the angle alpha, which is the required rotation we want.

After applying the R(z) rotation, we must reverse the three preliminary transformation in order.

Overall, the whole rotation can be written as the product of 7 matrices:

Remember, these seven transformation can be multiplied beforehand to form one matrix, which is then applied on each control point. This is beauty of matrices in the world of graphics.

Using this method of rotation suffers from the Gimbal lock; hence, a more advanced method called ?quaternion rotation? is employed in real-world implementation. I?ll discuss that in a separate story!

Matrices in code ? with PixiJS

This constructor creates a matrix as follows:

The documentation shows it as the above?s transposed form. However, a point is transformed by multiplying with the above form in the code.

On multiplying a point [x, y, 1] with the above matrix, you get:

PixiJS allows you to multiply this matrix with a translation, rotation, or scaling transform. It also provides basic matrix operation methods like identity, inverse, and application to a point.

The Matrix class is bare-bone and doesn?t do any bookkeeping. It also doesn?t keep a parent-child relationship, which is particularly important for PixiJS as it uses a hierarchical object structure to draw the UI.

The rotation property is the radians of rotation about the pivot point.

On top of the Matrix class, Transform provides these features:

A Transform class represents the transformation of an object w.r.t to its parent. Hence, it has two matrices:

I?ve touched on the word skew multiple times here. It also called shear mapping, transvection, or just shearing. It?s related to the physics term ?shear stress?, which occurs when a force is applied horizontally to an object whose base is fixed. 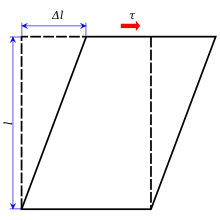 The dashed rectangle is deformed using ? force and its base is fixed. As a result, it is moved by delta L. Courtesy of Wikipedia.

?Shear mapping displaces each point in fixed direction, by an amount proportional to its signed distance from the line that is parallel to that direction and goes through the origin? ? Wikipedia

The shear stress diagram depicts a horizontal shear mapping. Here the displacement occurs along the x-axis, and is proportional to the distance from the x-axis (e.g. the y coordinate).

Horizontal and vertical shearing can be combined to the following generalized form:

Shearing and scaling can be carefully combined to cause a rotation. This because the relation below ?

Now you can understand how c- & b- and the PixiJS Matrix constructor were called the skews.

PixiJS?s Matrix has an interesting method ? decompose , which essentially converts a Matrix into a Transform object and spits out the position , scale , rotation , and skew properties.

I showed you the resemblance of scaling & skewing simultaneously and rotating. To decompose a transformation matrix, we have to solve that equation to check if scaling & skewing are being done separately or if a rotation was intended.

A PixiJS matrix is denoted as:

this expression is defined for all x and y, the constants must equal each other: If rotation was intended, the relation in the box will uphold.

This algorithm is used in the Matrix#decompose method in PixiJS. Check out the code ?