Watch the video or read below to find out!

Let?s begin by examining division of values with exponents. Recall exponents represent repeated multiplication. So we can rewrite the above expression as:

Of course we can take a shortcut and subtract the number of 2?s on bottom from the number of 2?s on top. Since these quantities are represented by their respective exponents, all we need to do is write the common base with the difference in exponent values as the power.

If we generalize this rule, we have the following where n represents a non-zero real number and x and y are also real numbers. Rule for Dividing Numbers with a Common Base

From here it is easy to derive the explanation for why any non-zero number raised to the zero power equals 1. Again, let?s look at a concrete example.

We know that any non-zero number divided by itself equals 1. So I can write the following: 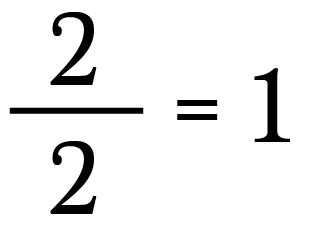 This is the same as writing: Now I?ll utilize the exponent rule from above to rewrite the left hand side of this equation. Of course, this is equivalent to: We can use the same process as in this example, along with the generalized rule above, to show that any non-zero real number raised to the zero power must result in 1.

What About Zero to the Zero Power?

This is where things get tricky. The above method breaks because, of course, dividing by zero is a no-no. Let?s examine why.

We?ll begin with looking at a common divide by zero ERROR. Division is really just a form of multiplication, so what happens if I rewrite the above equation as:

What value could possible satisfy this equation for x?

There is no value! Any number times zero results in zero, it can never equal 2. Therefore, we say division by zero is undefined. There is no possible solution. Again, rewrite it as a multiplication problem.

Here we encounter a very different situation. The solution for x could be ANY real number! There is no way to determine what x is. Hence, 0/0 is considered indeterminate*, not undefined.

If we try to use the above method with zero as the base to determine what zero to the zero power would be, we come to halt immediately and cannot continue because we know that 00 ? 1, but is indeterminate.

So what does zero to the zero power equal?

This is highly debated. Some believe it should be defined as 1 while others think it is 0, and some believe it is undefined. There are good mathematical arguments for each, and perhaps it is most correctly considered indeterminate.

Despite this, the mathematical community is in favor of defining zero to the zero power as 1, at least for most purposes.

Perhaps a helpful definition of exponents for the amateur mathematician is as follows:

By including the ?1? in the definition, we can conclude that any number (including zero) repeated zero times results in 1.

The notion of indeterminate forms is commonplace in Calculus. A simple example of why 0/0 is indeterminate can be found by examining some basic limits. These limits cannot be directly evaluated since they are indeterminate forms. Instead we must use L?hopital?s rule, taking the derivative of the numerator and denominator separately, to find the solutions are 2 and 3 respectively.

When dealing with an equation that results in an indeterminate form of zero to the zero power while practicing Calculus, make sure to implement techniques for indeterminates, such as L?hopital?s rule, to correctly evaluate the limit.

Next Lesson: Common Misconception About Probability

How To ?Complete the Square ? Visually

and the Trouble with Memorization

We?ve been discussing the Euclidean Algorithm and how to find the greatest common divisor of two numbers. The algorithm?

Guide To Fractions in 10 Simple Facts