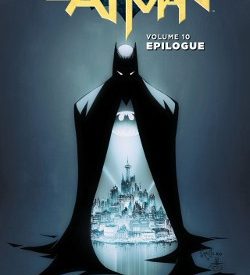 Scott Snyder and Greg Capullo?s run on Batman was one of the only consistently great parts of the New 52. It will probably go down as one of the best Batman runs of all time. You could just read it in the published or collected order, but the published order is broken up by events and fill-ins, and the collections miss out on some of the narrative impact of the one-shots and backups by grouping them together. Snyder (along with his collaborators) often used the various stand-alone issues, annuals, and backups to seed little details that pay off in later arcs. So this is my reading order of the whole run, restructured from the single issue and collected edition order, for the best narrative impact.

I didn?t include any event tie-ins or issues from other series unless Snyder was directly involved. There are a few issues that Snyder either plotted or co-wrote that can be skipped; they?re not crucial to the overall story and don?t have the same narrative flow. Those issues are marked with an asterisk. The collected edition that contains each issue is indicated, and links for them on Amazon are provided. If you?re reading along in the collections, the first half of this arc (and Volume 1) is untouched. The second half (Volume 2) requires some tweaking. DC likes to consolidate all the backup stories and place them at the end of a collection. Snyder however, uses them to tease out elements of the story. So I would recommend alternating between the main issue and backups if you?re reading the collection. I?ve also pulled out the annual until after the conclusion of the arc. It technically does take place in the middle, but it breaks up the action too much. I think it fits better as part of the epilogue. It comes after #9 in the published order. Skip ahead if you?re reading the collections. #0 Is meant as a tease for ?Zero Year,? so it doesn?t make a lot of sense to wait until after that arc, like the collected editions have. It also functions as a nice prologue for ?Death of the Family.? There are no changes if you?re following the published order. ?Death of the Family?

There are no variations between the published order and collection for this arc. If you?re reading the collections, pull a few more issues from Volume 6. This arc follows the collected order; we?re skipping the event and fill-in issues until after, so it?s one continuous story. These are the issues that broke up ?Zero Year? while it was being published, and the one-shots that came after. If you?re reading the collections, you?ll need to jump ahead again for the short story from Detective Comics #27 and Future?s End, since they should be read before ?Superheavy? to really pay off. Note that Batman #23.2 isn?t available in any Batman collections, so it has to be read somewhere else, if it isn?t skipped entirely. This arc is straight forward for the single issues; the annual is just moved to the end, instead of after #37 as published. I?m not sure what DC?s strategy was with the collections. There are two collected editions for this arc: Batman Vol. 7: Endgame and The Joker: Endgame. For some reason, DC chose not to include the backups or annual in the main collected edition. The Joker collection does contain all that, but the backups are grouped together at the end, and the annual starts off the collection, when it was published in the middle, and reads best at the end. Like Volume 2, the backups really enhance the main story when read in the published order. So for the best reading experience, save the annual for the end, and alternate between the main issues and the backups, starting after #36. The Joker collection also contains the event tie-ins from other series, but those can definitely be skipped. For the collections, we?re just pulling out the fill-in issue until the end, like usual. That?s all folks. Even though Rebirth is technically not part of the New 52 run, Snyder co-wrote the issue and it really feels like a much more satisfying capper than all the ones that come before it. This collected edition can also just be read straight through, after skipping the Future?s End one-shot, which was included earlier.

Disclaimer: I may make a small commission off any purchases made through links in this article.