Since the Mercers are mysterious, I started compiling some basic information on Rebekah Mercer?s husband, Sylvain Mirochnikoff.

He met Rebekah Mercer at Stanford.

He married Rebekah Mercer in 2003. They are divorcing.

He is (per Zoominfo) ?a Managing Director of the Institutional Equity Division at Morgan Stanley. In his current role, Mr. Mirochnikoff heads the Automated Market Making group as well as exotic and corporate derivatives trading. Prior to Morgan Stanley, he occupied several roles in equity derivatives trading at Credit Suisse from 1997 to 2008. Mr. Mirochnikoff has an M.S. in Engineering, Economic Systems, and Operations Research from Stanford University, and a M.S. in Applied Mathematics from ENSAE, the National School of Statistics and Economic Administration, in France.?

Some Financial Dealings and Possible Context

Since then, the market has settled, as seen in this one-year chart: 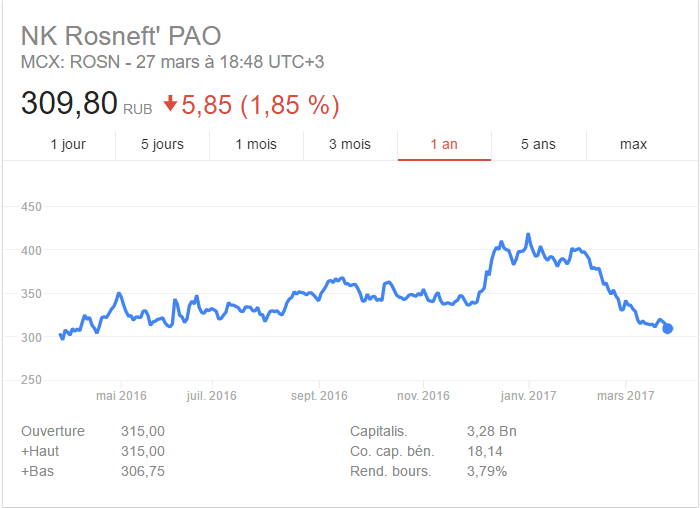 In 2009, the New York Observer reported that Rebekah Mercer and Sylvain Mirochnikoff ?love real estate? and had bought at least eight apartments in Manhattan. One was in Heritage at Trump Place. Screenshot of this archived article: RSB240 LLC appears to be a corporation formed to hold at least some of Mercer and Mirochnikoff?s properties. Maybe just the ones at Heritage at Trump Place, since the name appears to refer to ?240 Riverside Boulevard.? For example, records show that the couple bought a unit (no. 23AC) in Heritage at Trump for $9 million on April 7, 2010, then transferred it to RSB240 LLC for $0 on July 31, 2011, and then took out a mortgage from Deutsche Bank Trust Co. on that property for $5 million on September 9, 2012.

Transactions by the couple on unit 25A in the same building follow the same pattern: purchased for $5.3 million on March 20, 2009; sold to RSB240 LLC for $0 on the same date, July 31, 2011; mortgaged with Deutsche Bank for more than $10.25 million and for $11.25 million?these appear to be two separate loans, both dated February 20, 2014. They may cover as well other other units the couple purchased in the Trump building: unit SU66 and unit 24C. When time permits, I?ll review available documents and perhaps make a table of the transactions.

I asked a family member who deals in trusts and estate planning in New York about these purchases, which represent the couple purchasing contiguous units in the same building to make one giant apartment. He thinks the LLC is probably a family LLC and could have been created for tax purposes. For example, every year the couple could transfer a fractional interest into a trust or to their kids, which would give them a discount on taxes of 15 to even 40 percent. This is my condensation of a longer, technical explanation and any errors are my own. Upshot: Normal wealth-management dealings at 240 Riverside.

I looked at other real estate transactions under Rebekah Mercer and Sylvain Mirochnikoff?s names in the New York records system ACRIS. Mr. Mirochnikovff purchased a condominium in another Trump building at 200 Riverside Drive in August 2016. As the couple are reportedly divorcing, this may be a home he purchased for himself alone, as it is in his name only.

Other records in their names are for the collection of 240 Riverside apartments, and for an earlier residence at 220 Riverside. These date back to 2003. I will list these here later. Notably, 220 Riverside, 240 Riverside, and 200 Riverside are all Trump properties. The couple have had what appear to be their main residences in Trump buildings continuously since 2003.

The archived article screenshot above claimed the couple were listing a penthouse for sale for $35 million at 101 Warren. Another article, however, pointed out conflicting information about the property?s ownership: ?Although the Observer names heiress Rebekah Mercer and Morgan Stanley managing director Sylvain Mirochnikoff as the owners of the penthouse, an earlier article named Fortress Investment Group cofounder and Chief Operating Officer Randal Nardone as the owner. Public records identify Weeuno LLC as the owner.?

Weeuno LLC?s address in the ACRIS record for 101 Warren #3420 is given as 240 Riverside Drive #23AC. At the time, this unit belonged to Randal and Melani Nardone, who only later sold it to Mercer and Mirochnikoff (in 2010). And elsewhere, the Observer recognized this apartment as Nardone?s. Weeuno was incorporated in Delaware in 2007, and the Delaware Secretary of State database does not include ownership details. Weeuno could have been sold, or a stake could have been sold in it, to anyone, including Mercer / Mirochnikoff. But some records and other news items link Nardone to 101 Warren. Possibly the sale of the Riverside Drive unit to Mercer / Mirochnikoff created confusion over its owner.

ACRIS gives no record of the Warren Street penthouse having been sold. The owner is still Weeuno.

Other real estate transactions by Mirochnikoff and Mercer will have been done via LLCs, names currently unknown.

According to Rebekah Mercer, the couple?s four children need to know French to be able to communicate with family in France. She was reportedly quoted in a 2012 newsletter for the Ecole Internationale:

?My husband is French, and his entire family lives in Paris. Our children require fluency in French so that they can understand their heritage and converse with their relatives ? We couldn?t ask for a better school for our children.?

One of these family members is likely Serge Mirochnikoff, a French furniture designer and ?professeur au CFA de l?Ameublement? who made custom pieces for the yacht the Sea Owl:

The Sea Owl is owned by Robert Mercer, Rebekah?s father:

Sylvain Mirochnikoff is listed as one of the owners of this patent, as are Robert Mercer and Rebekah Mercer:

It appears to be a data-encryption technology based on a ?secret sharing scheme,? rather than on a key system or on biometrics, for greater security.

Some links I want to remember:

ZURICH An anonymous tip to Dutch authorities on thousands of suspicious accounts at Credit Suisse (CSGN.S) could hardly?

Want an adrenaline squirt from your job in banking? You could work as a high yield trader focused on the oil and gas?

When Lyudmila Putin, 59, divorced Russian President Vladimir Putin and married the director of a Russian non-profit?