Gannon Stauch went missing in late January 2020, from his home in Colorado, igniting a monumental search.

Gannon Stauch, 11, was reported missing in late January from his home in Colorado Springs, Colorado.

Hundreds of volunteers and law enforcement have searched for Gannon in extreme weather on the eastern edge of the Southern Rocky Mountains in Colorado. His case created widespread social media speculation and has received extensive national media coverage. Gannon Stauch?s stepmother, Letecia Stauch, was arrested on March 2, 2020, for the murder of her stepson.

On March 2, the El Paso County Sheriff?s Office made a bombshell announcement that his stepmother, Letecia Stauch, had been arrested in Myrtle Beach, South Carolina, and charged with his murder. They made the arrest despite the young boy?s body not being located.

Letecia was charged with counts of first-degree murder, child abuse resulting in death, tampering with a deceased human body and tampering with evidence.

?An autopsy was performed by the District One Medical Examiner and the deceased male has been tentatively identified as Gannon Stauch, according to the sheriff?s office press release. ?We would like to extend our deepest sympathies to the friends and family of Gannon.? The body of Gannon Stauch was found alongside a highway on the Escambia River Bridge in Pace, Florida on March 17, 2020.

According to Sgt. Rich Aloy of Santa Rosa County Sheriff?s Office, the remains were found between 9 and 10 a.m. on March 17. A work crew with the Florida Department of Transportation working on Highway 90, found the remains near the Escambia River Bridge.

?They found the body and contacted us,? Sgt. Aloy told PEOPLE. ?It?s a long bridge ? ? [the body] was along the side of the bridge, but not in the water. We don?t know when the body was placed there.?

The cause of death has not been officially released. However, a source close to the case told KKTV 11 News that Gannon was murdered by blunt force trauma, stabbed, shot, and stuffed in a suitcase before being thrown under the Florida bridge. A full autopsy is currently underway.

Details of the case have been kept sealed under a gag order in the Stauch case. Gannon Stauch was reported missing in late January 2020 from Colorado Springs, Colorado, and found deceased on March 17, 2020, in Pace, Florida.

Jan 27: Gannon?s stepmother Letecia Stauch, told police that Gannon was last seen between 3 p.m. and 4 p.m. According to Letecia, Gannon left on foot from their home off of Mandan Drive in the Lorson Ranch neighborhood, near Colorado Springs. Police list Gannon as a runaway.

Jan 28: Gannon?s biological mother, Landen Hiott, arrived from South Carolina to Colorado. She spent most of the night being interviewed by police.

Jan 29: Approximately 200 volunteers searched nearby neighborhoods and a field for Gannon. Sergeant Deborah Mynatt of the El Paso County Sheriff?s Office tells the public Gannon was added to the FBI National Crime Information Center database. Mynatt added, no one had been named a suspect in the case and they did not suspect foul play. However, Major Crimes detectives took over Gannon?s case.

Jan 30: The case is upgraded from a runaway case to an endangered missing child case because of Gannon?s age, need for medication, winter weather and the length of time he was missing.

Jan 31: Several social media pages speculate on Letecia?s involvement in Gannon?s disappearance. Letecia is interviewed by KKTV saying deputies had threatened to shoot her and put her 17-year-old daughter in handcuffs. 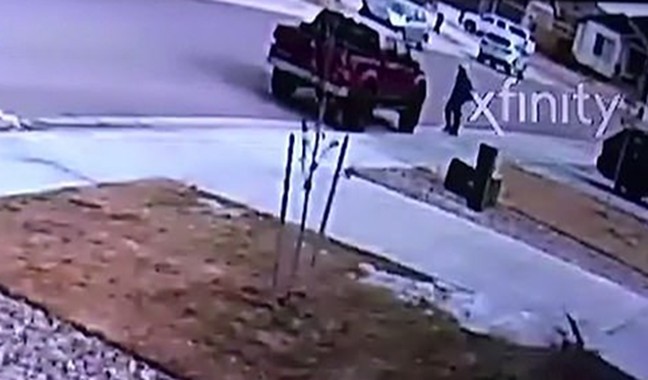 Video surveillance surfaces showing a child getting into a red truck around 10:15 a.m. on January 27, 2020.

Feb 4: A neighbor, Roderrick Drayton, shares surveillance video. The video showed Letecia with a child that appeared to be Gannon get into her red truck at around 10:15 a.m. on January 27. Around 4 hours later, Letecia returns home in the truck alone. A friend of Al Stauch, Gannon?s father, said he cried when he saw the video and said, ?she lied, she lied about the time.?

Feb 6: Searchers concentrate their efforts around Big Johnson Reservoir after it thawed from being previously frozen over.

Feb 7: The Search team uses a remotely operated submersible sonar vehicle to search a pond near the Stauch home. Feb 10: More than 300 tips have been called into the sheriff?s office. Authorities indicate they are going through each one and ask the public not to send in tips based upon speculation and rumor.

Feb 12: Letecia Stauch release a written statement to Fox 31, claiming Gannon was in her truck on January 27, and then later left his home with a friend. She explained that she ?would never, ever? harm Gannon.

?Saturday Night, G [Gannon] was helping me unload in the garage and cut his foot because there are a lot of tools because Albert does woodworking.?

?He sat on the edge of the car and we bandaged it up. He was good to go. He always loves helping his dad in the garage building things like his LEGO tables and the flowerpot they built for me as a gift. After this, I noticed G kept going to the side of the house.?

?He told me he was checking to see if the gate was locked because he was the only one with a gate key. It made him proud to be the man of the house while Albert was away. Fast forward, we did a hike on Sunday (cleared), and shopping on Monday (cleared as well for him getting out of the other side).?

?Please don?t think for a second that there isn?t enough technology to determine shadows and movement around the truck. There was also proof from my phone that we had taken a selfie in the truck in our driveway that was time-stamped. We always send pictures to Albert when we are out and about or when he is away.?

?That can be scanned for actual time verification. Last, from day one the Sheriff?s office has a known description of the person/friend whom Gannon left with.?

?I explained to them and provided evidence. They had information about G having the key to go out of the side gate. Last, they have more in-depth details that go along with this pointing to who sent the person or why he may have come. Again, I repeat they have had this initially, and I was asked to keep quiet about it so they could have the best shot at doing their job and bringing G home. The last thing that they needed was a hindrance to their investigation. I encourage you to think of any suspicious cars that may have been in the area watching a few days prior and keep praying for G!? Search crews with long poles and shovels search in the snow on South Perry Park Road.

Feb 14. Crews, along with FBI and Douglas County Sheriff?s Office, searched around South Perry Park Road, poking through snow and mud with poles and shovels.

Feb 18: Over 637 tips received. According to Crime Online, Letecia Stauch takes a polygraph and passes.

Feb 21: Ground search for Gannon is stopped, but the investigation continued.

Feb 28: A scheduled search for Gannon is stopped by the El Paso Sheriff?s Office without explanation. Letecia Stauch is arrested for the murder of her stepson Gannon Stauch on March 2, 2020.

Mar 2: Letecia Stauch is arrested in Myrtle Beach, South Carolina for the murder of a child under 12 years of age by a person in a position of trust, child abuse resulting in death, and tampering with a body. Authorities announce they do not believe Gannon is alive but haven?t found his body. The authorities assure the public and family that the investigation continues.

Mar 5: Letecia Stauch is extradited from South Carolina to El Paso County, Colorado. During the 48-hour trip, Letecia Stauch slipped out of her handcuffs and attacked one of the deputies who was treated at a Kansas hospital. Letecia spends the nights in a Kansas jail to continue the drive to Colorado the following day.

Mar 17: Remains of a boy are found in Pace, Florida.

Mar 20: Autopsy is conducted by the District One Medical Examiner in Florida and remains tentatively identified as Gannon Stauch. The judicial district attorney filed additional charges, including first-degree murder after deliberation and eight counts of committing a crime of violence. More than 107 search warrants have been filed in the case.

Al Stauch has been a man of few words since the disappearance of his son. The pain etched in his face. He issued a statement and an emotional video about Gannon?s life on the Facebook page of the ?Restoration Church? in Colorado Springs this week thanking the community.

?I would like to take this opportunity to reach out to the community here in Colorado and all over the nation to express my deepest gratitude and true heartfelt appreciation for the overwhelming support.

Many of you have either requested or inquired about information from me or interaction with me throughout these past two months. As you can tell from the initial missing child report to the arrest and charges in early March, and now the wonderful, yet gut-wrenching news that Gannon?s body has been recovered, this has been a heartbreaking and absolutely devastating time period in my life.

I am a very private person anyway but balancing my desire to show my great appreciation and my need to cope with the continually evolving devastation has not been easy. I thank each member of the community and media that has respected my privacy and need to process everything that has happened.

Those who I have personally trusted with information in the public have respected my privacy in an epic manner, and to those one to two people I owe you a lifelong debt of gratitude. If there is any question about whom I trust, take a look at who releases this statement. Anyone else is simply using me, my precious, heartbroken daughter, and my loving family as fodder for their personal agenda, which is absolutely despicable.

To those who are loving, supportive, and peaceful, thank you a million times over and God bless you all. I will more than likely not give any public interviews or statements until the end of the case, but I thank you all in advance for respecting my approach.?

El Paso County Sheriff?s Office is asking anyone that was in the Pace or Pensacola areas between February 3?5 to call them at 719?520?6666 or email tips to [email protected]