Home
/
News
/
Do you have Valuable Cabbage Patch Kids Hiding in Your Basement? | Gemr You Could be Holding on to a Valuable Cabbage Patch Kid and Not Even Know It!

Cabbage Patch Kids are one of those fantastic toys that blazed like a supernova in their day. They were the first dolls ever to create what we at Gemr call ?Collector Frenzy.? They were THE toy to have for Christmas when they hit shelves in 1982, and by 1983 there were actual Cabbage Patch riots (we?re not kidding) around Christmas as demand far exceeded supply. As the years went on, the all-consuming need for Cabbage Patch passed and many of us woke from our doll induced fevers. Not all of us, though ? cabbage_patch_world and cabbagepatchkidfriends still show off incredible Cabbage Patch Kids all the time on their Instagrams (we can?t stop looking at their feeds ? you should check them out)! You may be wondering: is my treasured doll worth some actual treasure? We have to start by bursting your bubble a bit?many dolls are worth about what you paid for them (around $30), but some valuable Cabbage Patch Kids are worth a small fortune! The forward thinking among us ? or those in love with the cute boxes ? stashed their dolls away and forgot about them. These people might just have a doll worth well over $500 hiding in their basement! Let?s start with a few essential things. The original dolls weren?t called Cabbage Patch Kids at all; they were called ?Little People? and were the creation of Xavier Roberts. Xavier made his dolls like his mother made quilts. Each one was handmade, and he signed their butts (yes, their butts) with a permanent marker ? later, some of them would come to be stamped (or signed and stamped). But we?re getting ahead of ourselves. As the ?Little People? (which is a name that hasn?t aged particularly well) grew in popularity, he opened Babyland General, a doll hospital that specialized in adopting out ?Little People.? Xavier still made each doll, but his staff dressed up in medical attire and helped families pick their perfect new addition. These dolls came with a slew of adoption paperwork which was all very official and marked them as a Babyland General official ?Little People.? 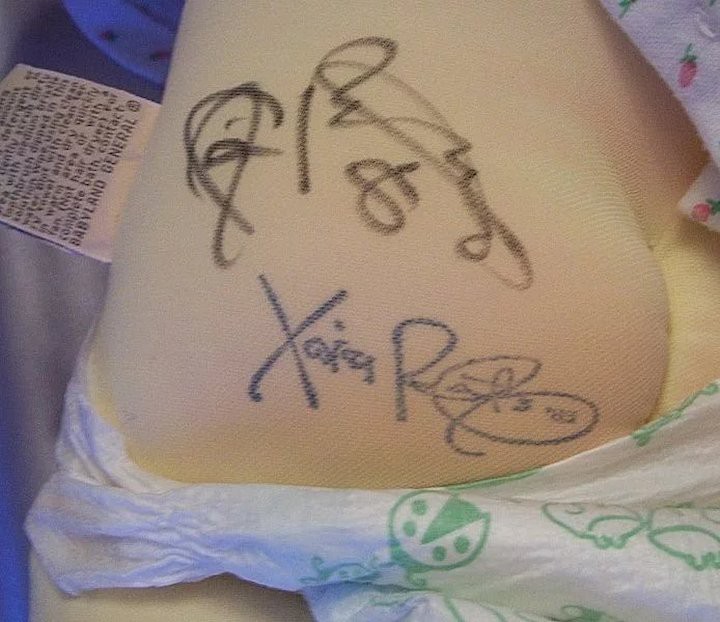 Via Ruby Lane. This ?Little People? is hand-signed and stamped.

These original dolls have some really distinctive things about them that set them apart and make them particularly valuable. Original ?Little People? were completely soft, even the heads ? later when they rebranded as Cabbage Patch Kids, they gained vinyl noggins. They also had a huge thumb which was a signature of Xavier originals. The final detail is that every single one of the early dolls was hand-signed by Xavier himself. Later in the line, they were stamped, and most, if not all, of these signatures, had an associated date which makes year identification easier! If you want a more in-depth look at what makes a doll valuable, we recommend checking out Katrina?s awesome article on Hubpages! In 1982 Coleco was given the right to produce ?Little People? under a new name, Cabbage Patch Kids. They created what most people remember as Cabbage Patch Kids from their childhood ? the vinyl headed, soft-bodied, yarn-haired dolls that sold in stores all over the world. Many of these aren?t worth all that much, but some (a rare few) are worth a lot! In particular, those still in their boxes can be worth a pretty penny to collectors ? especially if they came from overseas!

So now you know some of the things to look for. Wondering what these rare dolls are worth? Do you happen to have one that fits these descriptions? Well, since pretty much every Cabbage Patch Kid and ?Little People? doll is unique, we aren?t going to talk about the specific doll, but rather the type of doll and why they sold for as much as they did. With that soft introduction out of the way, here are five of the most valuable dolls sold this year. The good news is not all of them are Xavier Roberts originals! Which means that doll you got for Christmas when you were a kid might still be worth something! Usually, the US CPKs don?t have a lot of value. Even in box, they don?t command a serious price (they are sold for about $30). That isn?t true for all US Kids, though. Occasionally a rare pair of kids show up, and they can be worth a hefty sum! Some of these things are based on hair and eye combinations. The more unusual the paring, the more they are worth. One pair sold for an astonishing $340 in June 2018. Japanese Cabbage Patch Kids are rare ? for one, because they weren?t sold in the US, and for two, because they had some differing features than their American counterparts. Their clothing was more reminiscent of the area where they were being sold ? which seems obvious. The second difference was in their big doe eyes. The eyes of Japanese Cabbage Patch Kids had butterflies in the shine! Getting your hands on a Japanese doll is easier said than done ? one sold in July of 2018 for $500! Most ?Little People? strongly resemble toddlers, but Babyland General, true to their name, also adopted out babies. The babies usually didn?t have hair and had simpler clothing than their ?older? counterparts. These babies from Babyland General are highly sought after ? especially if they are hand signed by Xavier. In August of 2018, a 1979 baby sold for a not so little $555! One of the cool things about Cabbage Patch Kids is that they are all individuals. Hair color and eye color can be different, the head shape can be different, clothes can be different?you get the picture. The endless combinations make each doll one-of-a-kind. But occasionally there were Limited Edition runs based on literary or cinematic characters. This run was a Mark Twain set of dolls, and if you have all three, they can be very valuable. The dolls included Tom Sawyer, Becky Thatcher, and Huckleberry Finn. They don?t go up for sale very often, and very rarely all together. If you want to get your hands on a set of these famous literary characters, it won?t be easy. One set sold in July 2018 for $650! The collection had all their adoption papers and the body tags with their names still attached. Sometimes it?s the simplest things that people want the most. Many ?Little People? girls were created and adopted from Babyland General. They had yarn hair in many colors and styles, and eyes in many different colors. The most valuable ones, just like all Xavier originals, are hand signed. A little girl made in 1979 sold in August of 2018 for $750 with all her papers! We?re sure she will be well loved in her new home!